The sun is shining, the road sits like a black ribbon draped across the high open landscape. Long straights are punctuated by sweeping bends. But there’s traffic: it’s Saturday morning in France’s Massif Centrale and the locals don’t know we’ve got a long ride ahead of us, or care we’re on a biking holiday in their country.
I sit behind some sort of Citroen, which in turn is swerving over the white line, the driver desperate to overtake a camper van dawdling in front of us both. Another straight opens out and I can see ahead. Clear. We’re doing about 50.
"It's on,” I think, but the Citroen's going too. We move simultaneously to the wrong side of the road, “keep a view behind him,” I mumble against the wind noise in my helmet. “Keep a view, keep a view, he’s in, it's on it's on it's on, nail it," I drop my head down into what still air I can find behind my tiny screen and twist the throttle hard, holding on for dear life as the wind batters me. 110mph, back to my side of the road. Citroen and camper both safely dispatched.

Motorcycling is many things to many people: rebellion, either by being different or by breaking the law; a lust for technical things; excitement; desire to belong; achievement even. For me though it’s freedom, adventure, a dose of excitement and a very small bit of rebellion thrown in, but only a little bit. I’m quite good really.
There must be some of that desire to belong too, because 10 years ago a group of motorcyclists from work decided to go to France on our bikes for a few days. We went for three or four days and were chuffed we got as far as Epernay in the Champagne region of France. Happy days.

Our little group has changed and morphed many times since then; of the original six, only two of us have been every year; one of our number was killed at work, anther just stopped coming (twice telling us the day before departure) and others have sold their bikes or just can’t make it every year. I ended up taking over planning, organising and navigation duties. Navigation especially after Mike Hills sped off, leading us south-west instead of north-east one year.

Instead of four days we now go for a full week, with half an extra day thrown in for good will. Sunday to Sunday this year then, and four of us met at what has become the normal place, the services at Whittlesford, south of Cambridge, before setting off towards Portsmouth. It was warm, the sun blazing down on us as I arrived exactly on time, whereas everyone else arrived early. The four of us has all been before, John and Lee only the once, but AJ and I had been every year: seasoned motorcycle tourists. Sort of.

John had been on the phone to me the day before suggesting we meet near Huntingdon, it made more sense, he reasoned, as we would be travelling across to the M6, then the M5, to Portsmouth. This would have been rather a long way round, so I made a mental note not to let him navigate, then carefully explained to him, as a father does to a toddler, that his suggested route was not a good one and, as a toddler does to his father, he said he understood. But didn’t.

No journey to Portsmouth could ever be described as eventful, but there was a bit of M25 filtering to entertain us and dull the memory of the two red traffic lights Lee had ignored earlier. Once off the M25 we made pretty swift progress into the setting sun and through increasingly cool southern England. Dusk had well and truly arrived as we joined the final stretch of dual carriageway into the docks and it was here the first encounter with a road hungry car driver occurred, as the driver of a red Corsa was desperate to be on whichever piece of road AJ wanted to be on. He survived; he would have bounced anyway, though not as high as he would on previous years. 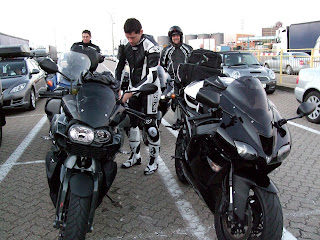 
It had been the British MotoGP at Silverstone that day and the ferry queue was evidence that plenty of French bikers had spent the weekend in sunny Northamptonshire. The most notable of these was a beautiful Paul Smart replica Ducati. I hope the bloke didn’t mind me gawping at it.

It was crowded with bikes on the car deck; all shapes and sizes were being parked then unloaded by their riders. On P&O ferries you have to strap your own bike down, but here on Brittany ferries the crew do it. I’m guessing they didn’t like the look of me as they did all the bikes round me, giving me plenty of time to trip over one of the straps they’d used, before eventually securing my pride and joy 20 minutes after I’d unloaded kit needed for the crossing. Once we left the bikes it was our task to find where were to sleep. En route, John practiced his magnet fetish as he managed to attach his tank bag to the ship for the second year on the trot, this time to the stair rail. Fool.

We had opted for reclining seats in which to sleep in order to save money and, whilst it may well have been cheaper, it was possibly one of the worst places I’ve tried to sleep. Once in the chair it was possible to recline it, though the slightest movement resulted in one tipping forward again with a jolt. The first few occasions this had me staring wide eyed into the gloom, then desperately scrabbling around fiddling with levers and buttons I couldn’t see. After the tenth occasion I just swore. Quietly mind, I didn’t want to disturb all the other people not sleeping. I had come prepared and had changed into shorts, but how the others, Lee especially in his one-piece leather suit, ever even dozed even lying on the floor, I’ve no idea. 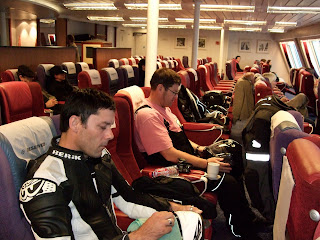 Lee, in the funny suit, and AJ stare at their helmets preparing to sleep

I was tempted to write that we were woken, but that would be a lie. More accurately, we were disturbed from our bleary-eyed reverie by lights unceremoniously flickering on, then sorted ourselves and our kit ready to join our bikes. An hour later, sleep still crusty in our eyes, we emerged from the ship, onto the docks, then onto French roads for the first time. It was cold and grey as the sun had yet to rise and add colour above us.

When you drive from a ferry port there is a line of vehicles of varying descriptions, all of which have obviously come from the same place. The occupants of each coyly eye the others, wondering whether they had got off before or after them. Some secretly smile, believing they have proved their driver’s navigational or driving skills. Others stoically stare straight ahead, “how did that bastard get ahead of me,” they silently curse. This goes on until the last of your travelling companions has disappeared with the passing of another junction. On this occasion there was no such gloating inside my helmet; as we passed through the early morning traffic of Caen, me leading the group along the same bit of dual carriageway for the third time, I was too busy desperately trying to interpret what I was being told by the sat nav.

Away from town, quiet roads guided us south and, by the time we reached the first stretch of autoroute, the sun was well above the horizon and a little warmth was permeating our tired bones. We stopped for petrol at service station, and then went for a few cups of coffee and a croissant or two. AJ again displayed his innovative approach to traffic mandatory traffic directions and entered the car park through a ‘No-Entry’ sign.

We tend always to spend most of the first day of these trips on the motorway, it means we get to where we want to be, which inevitably is hilly or mountainous areas with a multitude of twisty roads. This year we were headed for the Pyrenees and that first day was to be no different. It is toil dragging across a large country, though petrol stops are an ideal way to review the journey so far and take the piss, for whatever we can. Motorcyclists have to have above average observation skills to survive on modern roads; they also tend to be strong on brand loyalty; AJ and I like our BMWs for instance. Having spoken to him, I know Lee likes his Kawasakis. Why on God’s earth then did he fail to see the huge, bright green, fully liveried Kawasaki Racing articulated lorry he overtook? Piss take number one then.

I knew there was no direct route south for us to get to Montauban and that night’s hotel, so was aware the sat nav would take us on some lower speed roads, but I had never envisaged that the N174 between Poitiers and Limoges would be quite so tedious. It was straight and boring, the only thing that would occasionally prick one’s attention was the odd eagle soaring above us, sometimes casting a fleeting shadow across the monotonous tarmac.

It was past our lunch time when we arrived at Limoges, so I eagerly followed a sign for McDonalds. I have been caught out by these signs before in France. Let’s face it, there aren’t many signs for McD’s in the UK, where they are culturally far for acceptable and more ubiquitous. In France if a town has McDonald’s there is a red and yellow sign telling you about it, so you’d expect to be able to trust it even though its presence is a little incongruous. But the sign is obviously in some sort of secret code only French people can comprehend, they don’t want foreigners to think they eat anything un-French, “Ah monsieur, MacDonalds, non monsieur, je ne comprend pas. Nous mangeons seulement la cuisine Française.” In Arras one year I followed directions indicated by one of these signs conveniently placed on the city limits. It led us miles out of our way to do a complete clockwise circuit of town, taking about 30 minutes, to a place about 500 metres from where we had started. Bastards! Limoges was much the same and, after I suffered a massive petulant frenzy, AJ went off and found it. Well he would wouldn’t he? 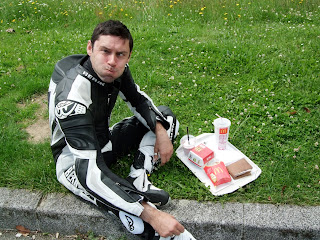 Garlic, in a Big Mac?


Food hungrily dispatched, we filled up with petrol at a dodgy looking service station. I’m still checking my bank statements for numerous spurious transactions for the purchase or garlic from shops throughout central France. Back to the autoroute, we set upon the final and uneventful leg. For a motorway, there were bits of relative interest; the odd sweeping bend or two, but for the most part it was tedium.

By the time we arrived at the Hotel Ibis on the edge of Montauban, the sun had fulfilled its day-long promise and it was pretty warm. I cocked up my pidgin French, was bailed out by the English speaking receptionist, collected the room keys and ordered beer. Ah!

John, AJ and I sat by the pool drinking whilst Lee launched into the first of the 374 phone calls home he would make that week. Dinner. Bed. Day one done, tomorrow the real fun begins.