Riding a bike is involving; every journey is a bit of an adventure, something different from the norm; something that not everyone does. You are out in the open, not concealed, cosseted and removed from the place you ride, you are part of it. You are there. I reckon that when you go through a town in a car you have just been through. When you ride through you have visited, even just for the briefest of moments. You have seen more, heard more, felt more and even smelled more. Motorcycling is a sensory thing. It is beautiful.

Not long after we left Montauban we were riding through open countryside. IN France, not just passing through. Down back roads flanked by avenues of trees casting a green tinged shade across us, giving shelter from the blazing sun. Orchards filled the roadside fields; not trees, but high trellised apple bushes, their fruit filling our nostrils with their scent, even in June their aroma was inviting and evocative. I could feel the sun where there was no shade; as we passed through villages I could hear the lovely, fluid, rolling language from those on the pavement. I was alive, wide-eyed, a little boy in my element. My heart beat faster in my chest. I was excited.

Now we’ve got all that arty bollocks out of the way. Let’s get down to what happened. Having arranged a time to meet for breakfast, a quick peek out of the window revealed AJ and John had beaten us by some considerable time, as they were already wandering around the pool chatting and smoking. Lee and I wandered down some time later to find they had obviously got bored and gone back to their room. We consumed a leisurely breakfast, before making preparations to leave. Out in the car park we found a large orange tanker was noisily emptying the hotel’s septic tank right next to our bikes. The smell was all consuming and we were soon away from there, though only after AJ announced over the din that he had left his sat nav on all night and the battery was flat. It didn’t work again all week. 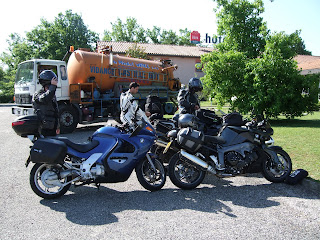 last night's doings being sucked out as we prepare to leave

After those orchard-flanked roads, the land began to undulate a little. We headed through Auch where we all gazed in disbelief at a man who was obviously desperate to personify the parody of a Frenchman. He was tall and slim, probably middle-aged and was carrying a baguette under his arm. On his head he wore a dark coloured beret and he sported the most extraordinarily ornate moustache. I have never seen anyone looking quite like it: I bet he even smoked Gaulloises and stunk of garlic. He was probably from Southend.

Out of Auch the road climbed steadily and began to twist through forested hills. In a tiny village we stopped at a tiny petrol station manned by two scruffy youths who insisted on cash only for our fuel, chocolate and drinks. As soon as we left the forecourt to stand on an adjacent bridge, both bare-chested, they mounted tiny two-stroke scooters and screamed off up the road. Probably faster than me. Probably having stolen the contents of the till. Hey-ho, I had my Snickers and my tank was brimmed.

Anticipation was building deep inside me, I’d never been to the Pyrenées and was really looking forward to it; with every mile that passed we were nearer to somewhere new and different, though each of those miles was an adventure in itself. That anticipation made the final long, straight, though undulating road towards Tarbes seem even longer than it was. AJ zoomed off and took some photos of us as we passed, and I noticed Tarbes’ Rugby ground, then wondered if there was a game on.

In the distance the dark shadows of distant mountains had been becoming clearer, but now, as we negotiated the nothing roads into Lourdes, snow could be seen on the peaks. I’m sure that if we had stopped I could have stared long enough at them and my map to have mistakenly identified magical, almost mythical mountain passes, scenes of legendary battles for Tour de France supremacy, of cyclists’ broken dreams and bodies; and our destination.

Before that we had to drop our kit at the hotel. The Ibis in Lourdes is much like all the others with the ubiquitous décor and feel, though we weren’t there for the hotel, or even the town, so dumped our kit and were back on the road in about 20 minutes. We stopped for lunch in Argeles Gazost, at the base of the Col d’Aubisque and all ate large pizzas whilst chatting to a couple from the UK visiting on a cycling holiday. Before long though, the Col de Tourmalet was calling, so we were off.

We were followed for a while by a group of German bikers on a disparate variety of bikes. We formed a large group strung out along gently winding roads through the valley. Soon we were all heading up the Gorge de Luz, a sheer rock wall on our left and the beautiful river sparkling to our right. The Germans had been left behind or more likely stopped; no one is as slow as me on two wheels, but we soon had another partner, though this one we followed and was far more dangerous. It was a set of slow moving, but impossible to pass road works which, in turn was spreading tar on cracks in the road surface, then scattering gravel. This left the surface dangerous in some places and unpredictable in others. The rest of the attempted ascent of the Col du Tourmalet was ridden in such treacherous conditions. Every few miles we would suddenly encounter another series of these lighter grey patches, often a change in colour was the only warning that traction was in question.

This road is very obviously a great road, though. It has a reputation as one the great roads of both motorcycling and cycling; the Tour de France was to pass over it twice only three weeks after out visit, probably why it was closed for repairs at the top. We stopped, disappointed at a car park by some sort of nature visitor centre where we took photos, cursed our luck and watched other unfortunates try to go further, then fail, returning equally unhappy, no doubt.

The location was one of total beauty. We stood on some rocks above a bend surveying the valley, the road below created a horseshoe around the lush green mountain side. On the other side of the valley the snow-laden cap of the Pic du Midi de Biggore bore a stark contrast to the stunning azure sky, itself unadulterated by clouds. Behind us a stream trickled under and past the rocks on which we perched, its source was way up a narrow valley that disappeared high above us. It really was a beautiful sight. 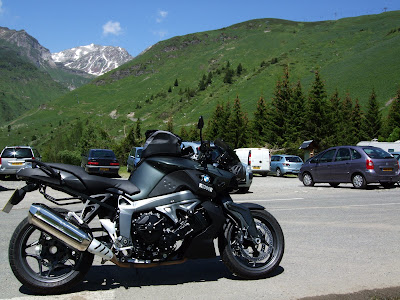 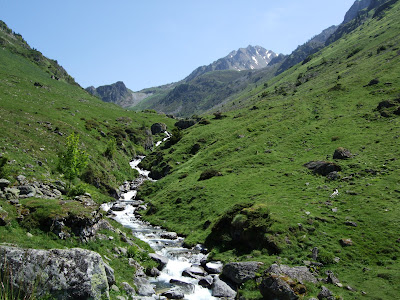 half-way up the Tourmalet

After a rest to reflect on this place and our misfortune, we re-mounted our bikes and headed back to Lourdes. Again we negotiated the gravel patches, which seemed even less predictable in their location on the way down, but once through the town of Luz-St-Sauveur, they seemed to fizzle out allowing an increase in speed and a chance to really relish the gorge we had ridden up earlier. Once in the valley the road widened. It was new and perfectly surfaced. The river was nearly un-noticed, glittering blue in the sunlight, as we hammered our way back to the hotel.

We showered and convened in the bar a while later to sample a couple of beers and watch the hotel staff resign themselves to footballing ignominy as France slipped out of the World Cup before their eyes, which were becoming less attentive to the TV as the final whistle grew closer. Town beckoned.

I hadn’t really known what to expect from Lourdes. I knew it was some sort of Catholic shrine and, whilst I expected tacky gift shops stuffed with cheaply made but highly priced plastic Marys, I didn’t expect what I saw. I may have missed the good bits, I know I did miss some, but I found the place thoroughly depressing, so much so that I realize now it cast a shadow over most of the rest of my week.

It was dirty and run down and, as we hadn’t seen many restaurants on our ride into and through town, we picked the first street that looked as if it held somewhere to feed us. The first place we found looked very nice. And far too expensive for us, so we carried on ‘til we picked what appeared the best of a bad bunch. We all had steak from an uninspiring menu and I ordered a bottle of Madiran (a relatively local wine made from the tannat grape, now favoured in Paraguayan wines. I had to get some wine shit in!) We watched as line after line of pilgrims wandered by carrying candles and prayer sheets. Many were pushing others in wheel chairs, and I could sense their desperation as they headed to mass in hope of an unlikely miracle. A good number of the town’s residents I saw bore testament to the futility of the pilgrimage. Some appeared deformed or ill, many so very sad, eyes deep and tired, as if they had come and would stay until they were restored to health. Or they died.

After dinner we split up and I wandered back to the hotel feeling empty and perhaps let down. I was a bit angry really. Religion had brought so many of the faithful to this tired little town and sort of sucked them in, like the reverse of some evil malevolent haunted town in a Steven King novel. It seemed to me that it would hold them and deceive them, but feed them enough to maintain their faith. There wasn’t even anything but BBC World on the TV. 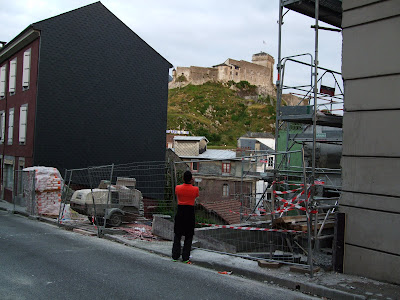 Lee photos the ruins of Lourdes