It’s November as I write and cold. My ride to work today was evidence that summer is gone and we now face long dark months until warm roads and sunshine welcome us onto our bikes again. You can probably tell by the vagueness of this account that November also means that memories of this year’s trip are fading fast. This morning though I was back there; the smell of leather wafted from my trousers in the garage and opened a door in my memory. Though the sky was dull outside and the temperature low, for a brief moment I felt I was getting ready for another day riding with my mates under clear blue skies, on spectacular roads immersed in awesome scenery, not a chilly 12 miles on the A14 to work. Such was the brilliance of this year’s trip, the memories may fade but, somewhere they shine brightly in my soul needing an insignificant reminder to bring them briefly back to life.

We were becoming accustomed to sunshine and were unsurprised when we woke in Lourdes to rapidly rising temperatures and endless blue above us. Sadly, after my own little pilgrimage to Agnostic Enlightenment the night before, disillusionment was weighing me down a little when we left and found a petrol station near the hotel. We set off east on a road that promised and delivered very little, then joined the D935 to head south and into the mountains. At Ste-Marie–de-Campin we stopped so Lee could take some photos of himself smoking and a church, before venturing high into the mountains.

Just before the first hairpin on the ascent of the Col d’Aspin, there was some sort of visitor centre with a large car park. I was just setting myself for the approaching left-hand bend, when a bald old twat in a bland looking car, decided it would be nice to pull out in front of me. Now, I may not be much of a motorcyclist, but I can recognise a twat a long way off and managed to see this one coming, though I was still muttering obscenities into my helmet when I selected first gear and ‘fifty-penced’ it round the first of hundreds of bends that day.

The road was evenly surfaced and largely tree lined but, once we had battled through deposits left by the herd of cows at the top, we were treated the most captivating view. Our route was clear to see, snaking its way into a lush, green valley that had snow-capped sentries in the far distance. The valley was like a hand; in the palm was a small town, surrounded by five lesser valleys, fingers clawing at the forested slopes of the high mountains. Now, sat at home I can see the route we took on my photographs, but there I was basking in my ignorance, just appreciating true beauty for the second time in 24 hours, and not the last time that day. 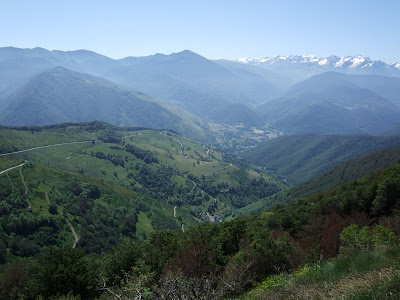 From our vantage point, we could see strategic points on the road from which photos could be taken, so each allocated ourselves a spot and set off down the mountain one by one. The plan was to leave enough time for the bloke ahead to get in position to take the best photos. It worked well, though the evidence is never likely to be seen as I’m the only one to do anything with my photos. SHARE YOU BASTARDS!

It was a great ride down; well surfaced and mainly traffic free, though I got stuck behind a cyclist, himself stuck behind two cars driven by men so old the concept of motorized transport was still a thing of wonder to them. In the end, the cyclist swooped past and, having a better view round the next bend than me, indicated it was safe for me to overtake. At the bottom I checked the sat nav only to find that it had shut down. I turned left and parked, then fiddled around until I came to the conclusion that the Garmin was shagged and navigation was about to get interesting. Whilst I had maps with me, my tank bag doesn’t have a case for one. There wasn’t much point anyway as I’m so long sighted I’d have needed to hover six feet above the bike to be able to see a map. I did have some route cards printed in large letters, but I’d still have to make regular stops to check the map. Bollocks.

I had turned the wrong way at the bottom, but worked out where I was supposed to be going and led the group off, this time up the Col du Peyresourde. I was forming the opinion that Pyrenean roads are not as tight as Alpine ones and generally had a better surface, making my trip that much more enjoyable. This road was no different and the top was possibly one of the best places I have stopped for lunch. The road passed through a shallow gorge at the top. On one side the hill was immediately shrouded by pine trees, the other rose sharply to wards a mountain top. In each direction all that could be seen was clear blue sky and mountains. There was little traffic, just a little restaurant, with tables shaded from the heat by parasols at which sat a number of people, including two lots of Brits. One couple were in their early twenties and had cycled up there, the other couple in their late fifties and had arrived on a similarly aged British motorbike. We all chatted briefly before I sliced my mouth open on the crustiest baguette the world has ever seen and John attempted some comical French.

Post lunch lethargy set in a bit as we all set off down the mountain towards Bagneres-de-Luchon. Again we stopped for photos, and again I’ve never seen any of them, except the ones I took at the junction of the Port de Bales, having missed Lance Armstrong there by an hour of so, I later learnt. I would recommend the Col de Peyresourde to any motorcyclist, it’s beautiful and not too taxing, though very steep in places. 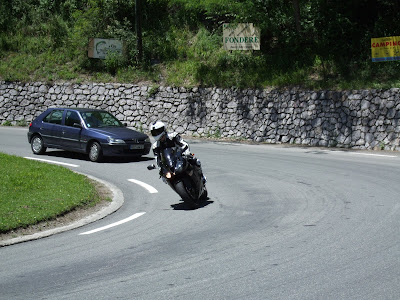 We re-convened at the bottom, opposite the cemetery on the outskirts of Bagneres, then off through town and out, along an ever narrowing road, which became even tighter after the junction for the ski resort of Super Bagneres. We ended up in a tiny, well spread village set along the banks river, deep in a gorge and surrounded by green trees. It was deserted at first, though when we eventually reached the end of the road and a turning circle, the piercing nature of stares cast in our direction made me feel that we had inadvertently entered the World wide summer HQ of a secret religious cult. Fearing for our anal virginity – well mine anyway – we beat a hasty retreat, back to Bagneres then up the Col du Portillon and into Spain.

This road was tight and the trees crowding the road never allowed any sort of view. We paused briefly at the top where saw an old man wearing shockingly coloured lycra get out of a car driven by a similarly aged woman, get on his push bike and begin the descent. Strangely we’d seen him to exactly the same when we stopped for lunch. Even I’m OK going down hill on a push bike. Still steep, the road dropped into the valley for our first visit to Spain. We joined the N230 at the bottom by a fire station, then blasted down to Vielha. Here we filled up with petrol and water and I quickly scoffed a Snickers bar.

This was not the Spain I had visited on other occasions. The surrounding mountains were green or grey, not brown, and the Catalan language spoken was obviously different from the Castilian in the rest of Spain. We stopped at the back of the queue to get through the Tunnel de-Vielha. This was a bit of a calm before the storm as, once through the road gave us one of the most amazing trips of our lives. I knew that it would be a little twisty, and probably quite good, but I didn’t expect it to go on for quite so far.

We followed la Noguera Ribagorçana south, down hill all the way. Bend after bend after bend kept us interested. I have to admit to more than one dodgy overtake, one especially where the victim had to jam on the brakes as I returned to the correct side of the road, feeling and smelling the on-coming lorry as it passed. There’s not a lot more I can say about this road; I don’t have the superlatives in my vocabulary to describe it. Exhausted and exhilarated we stopped for the toilet and ice creams at a café in the dusty village of Puente de Montañana. It was oppressively hot here, no place to be wearing leathers, so we sat quietly and contentedly under the parasols, occasionally grinning tiredly at each other. This was brilliant.

I sort of knew that the next bit was even better. The C1311 to Tremp had been recommended on www.alpineroads.com though it’s a long way from the Alps, so I was expecting something good. It was. Except for one patch about 10 feet long, the surface was very good and I don’t think there were more than 50 straight metres in any one place. In honesty, I find this sort of road a bit too technical to do confidently or well, so I get frustrated, but it really was a road to behold. If you like riding slightly tight roads, ride this. And again. And again.

I was expecting some sanity at the bottom, but no, it went on some more, though this time wider and faster, and just as devoid of traffic. Long sweepers lined with polished Armco barriers, which reflected the blinding sunlight, took us south on the C13. It was relentless. Until we arrived at Balaguer. This was Spain: brown dusty, flat and very hot, the sun burning through our kit, sending trickles of sweat down my back. The villages were like something from a modern day western. Buildings half finished, deserted but for dirty, emaciated dogs standing at the road-side, probably wondering whether to end it all. And the road was straight. We then fought through the late rush-hour traffic of Lleida and found the very up market but luckily quiet AC Hotel. Here, in the bar we drank a couple of beers and felt the energy return to us, conversation becoming more and more animated and we did. We wandered about half a mile from the hotel for dinner in an Italian restaurant where my pizza was about three times the size of the plate. An early night was called for; we had been riding all day and had been challenged virtually every mile. I will never forget that day.