Now, I’m not an arty type, though I do like poetry, just as long as it’s Siegfried Sassoon, Wilfred Owen is just too flowery, Sassoon says it like it is. I think. I don’t like pictures, though I appreciate a good view, and sculpture is just there, not worth noticing. As for architecture, I happily wander round town and fail to notice the buildings around me. I once read something that described Cambridge as architecturally bereft, that only the university buildings had any merit, it said. I read it in the car and have yet to check if I agree. Proof, I think that I don’t give a monkeys for whatever bridge I may be travelling over. Today though, was different. There is a bridge over a valley in the south of France that is rather famous. Not only was it built in France and designed by an Englishman, it looked striking in all the pictures I’d seen and, on a rainy night in a bland Cambridge pub months before, we’d all decided we wanted to ride over the Viaduc de Millau. First we had to get there.

We turned left out of the hotel, not right, so were unable to see the architectural wonder of the Cité de Carassonne in the daylight. Desperate for fuel, we circumnavigated an industrial estate north of town instead. We found the petrol station but couldn’t find a way in, I lost patience so set the sat nav to resume the planned route which, coincidentally, took us to the petrol station entrance.

On the road proper, we continued yesterday’s journey on the D118, north towards Mazamet. It started fairly quietly, just another country road, but as we climbed the Montagne Noir it became twisty, though not brilliantly surfaced in places. A flashing green cross, ubiquitous outside French pharmacies, flashed briefly to tell us it was 28.5 degrees at 10.30am, but the road was shaded by the thick forest which surrounded us until we began the descent to Mazamet. This section was steep with a reasonable surface, and plenty of tight bends as the road followed closely the contours of the mountain side. We were much higher than I had envisaged and the view through the trees was wonderful. Of course the French being the French, they had taken the time to show it off and we all stopped at a view-point tacked precariously to the side of the road. Here Lee let us each play with his camera, so long as we took photos of him with it, whilst the rest of us captured the view. 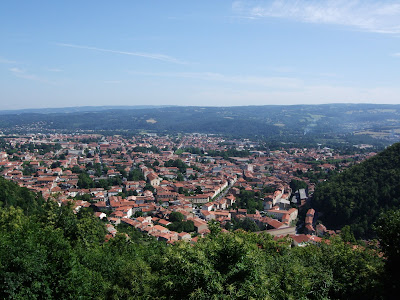 Some time wasted, we set off down what was left of the mountain road and into town where we joined the N112. This is wide, well surfaced and open. It is also a major route and carried traffic to prove the point. Though not tortuously slow, progress was hindered; every time we got past one lorry, we’d come across another equally slow one. For some reason though, I didn’t detect the increase in tension or frustration that this sort of riding normally brings. Perhaps we were all just content, we were in a beautiful place and not having to work too hard just to get somewhere.

Enough of this placid stuff. At a place called St-Pons-de-Thermieres, we took a left onto the D908. Check it on a map; it looks uber-wiggly, but it’s not, it’s good stuff with open bend after open bend and smooth tarmac. With very little traffic to hinder progress, the pace increased with the heat of the sun, which beat down into the valley the road followed. We spotted a small roadside restaurant in a lay-by at a place called Mons-la-Travalle, parked our bikes under a beautiful tree and asked if we could eat. The owner, just opening up, was at first reluctant, saying he had a coach party visiting, but realizing we were four hungry Englishmen and would spend good money, he relented, though sat us at an outside table furthest from the door. This surely was one of the best lunch time stops we’ve had over the years; quiet, dignified, friendly with good Viande Paysanne, we sat and gassed and laughed. Perfect. Sure enough, after a while the place was full, not only locals, but also a coach load of New Zealanders. 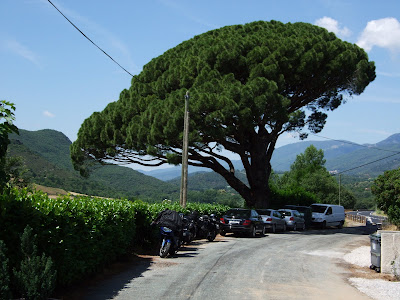 bikes sheltering from the heat, until the sun moved 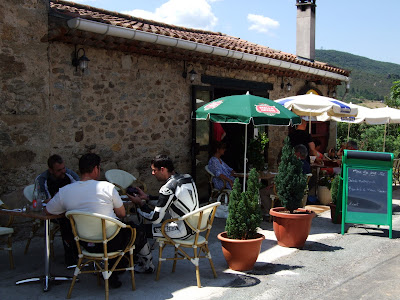 We probably sat there too long, but it seemed all too soon when we left, though it didn’t take long to get back in the swing of things. This area really is the epitome of rural France. The smaller villages were deserted and the towns bustling, the roads in between quiet in the main. We left what appeared to be the old valley road at Bédarieux and climbed up on a much newer, but no busier stretch. It was wide open a wound its way over high ground, taking us quickly down to Clermont-l’Herault, where stopped for petrol. A quick look at Google Earth shows how brown the valley is and it really was oppressively hot here, 36.5 degrees, not somewhere I wanted to stop for long, not with my clothes on anyway.

The next bit was on the A75 Autoroute, which would culminate by crossing the bridge at Millau. I don’t mind riding on motorway, it’s a means of getting to the good roads quickly, but this was a good motorway. It was obvious we were going up hill, but I recall rounding a right hand bend and seeing the sun glinting off cars moving along the top of an escarpment high above us. I remember feeling astounded, and a little excited, as I realized that the Autoroute we were on was the same road carrying those tiny little specks sparkling above us. What followed was the steepest twistiest bit of dual carriageway I’ve had the pleasure to encounter: perfectly surfaced, it wound its way up to the point I had seen, then settled into more mundane motorway fayre. The landscape was a bit like moor land in the UK; we were high and surrounded by long, bare, browny grass sprouting from low rolling hummocks. It reminded me of the military training area at Sennybridge.

I do like a bit of music when on motorways, it helps me concentrate, and this bit was no different. My Garmin Zumo has an MP3 built in and I switched it on to make the miles to Millau more interesting and to increase the anticipation. As we travelled further north, roadside signs began a sort of countdown to the bridge and ‘A Glorious Day’ by Embrace began playing in my ears,

Sang Danny MacNamara. There was a grassy bank on my right, the road having entered a cutting; the view was short, no more than about 400 metres. Then,

“You came along, on a glorious day
By the time that you left
I was crawling again…”

It all opened up in front of me: Glorious was in my ears and GLORIOUS! was in my eyes. The bridge stretched in front of me, it’s stunning piers high above, elegant, white and beautiful connected to the road by ghost-like white cable-stays. In turn we were high above the land below. The view was sublime: perfect sunshine illuminating the huge landscape either side. I caught my breath and slowed, a sin to cross this at any speed.
A lump in my throat,

“…you came along, on a glorious day,”

A tear in my eye.
Beautiful.
Stunning.
Glorious.

It’s a bridge, I hear you crow. Yep, it is. But it touched me. And with some northern bloke, my brother-in-law reckons can’t sing, telling me it was a glorious day, I couldn’t help being moved. If this had been built in Britain, some road safety buffoon would have forced the erection of concrete sides to prevent the view. Had the design not been deigned too poncy, they would have painted it grey, just to make it less attractive. It is art. It is drama. It is the greatest man-made structure I have experienced and I would recommend a journey just to cross it. 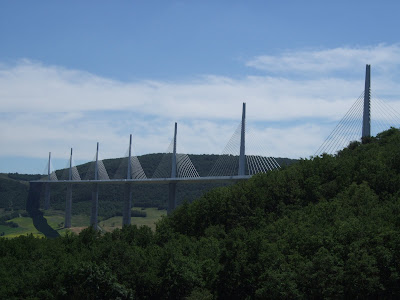 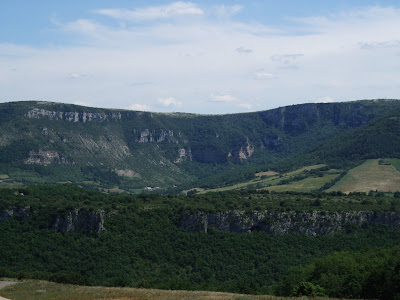 the landscape it was built to cross 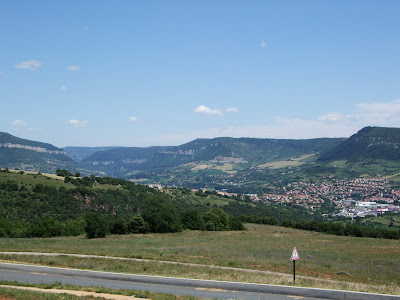 Millau from the visitor centre

There is a péage just beyond – well, you didn’t think it’d be free - and a viewing station with a visitor centre. We stopped and took photos, though a walk up close was not possible in the heat and what we were wearing, then had an ice cream before setting off again.

We by-passed Millau town, by mistake really and joined the D907 to head up the Gorges du Tarn. I was expecting an awful lot from this road, what I got was not what I expected, but great it is. It starts benignly enough, twisting and turning through the odd village, the walls of the gorge getting closer and closer, higher and higher above our bikes and us. I really had no appreciation of how long this road was, so was getting a bit bored, the anticipation dissolving into hints of disappointment. However the villages became fewer and farther between and the road became twistier and less well surfaced. This is not a race track, it is hard work, very challenging. At one point we were riding through a shaded section, right on the white line. The road was about one and a half cars wide and had such a crown, it dropped about 18 inches to the kerb on either side. It was bumpy and had numerous repairs consisting of tar poured on cracks, the tar melting in the hot weather. Occasionally, however, it smoothed out and became a real joy. To ride it is an achievement.

Of course we stopped for some photos. AJ and I were parked up, looking at the scenery when we heard Lee coming. I set the camera, lined up my shot and waited, then round the bend he came. Riding a ZX6-R the two Yamaha FJR 1300s close behind him seemed huge and slightly ungainly, especially as they were cranked right over. I decided I wouldn’t snap, especially when I realized the two tourers were in fact Gendarmes, right up the chuff of the oblivious Lee. They smiled at AJ and I, then tracked Lee round the next left-hander, one of them with his left hand held high in the air, pegs near the ground. 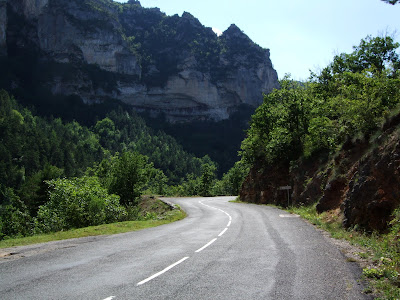 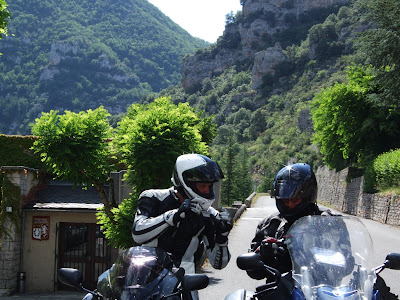 Lee explains to AJ why he's so photogenic

On and on we went, savouring a great place with a great road running through it. It was breathless. So breathless that we turned off a bit earlier than planned. Perhaps I was deceived by a sign for Mende in the village of Ste. Enimie. Or the fact that the road seemed to go straight up the side of a high grey rock face. Whichever, we all turned off onto the D986 and enjoyed every sort of bend from tight hairpins to open sweepers. Up the rock face we sped slowing for the stupendous view on our right. Over the top and back onto that moor like landscape on a perfectly surfaced road which dipped, dived, swooped and turned before dropping again, where I nearly took out John by braking on the exit to a hairpin(?). Just brilliant.

The Garmin found the Hotel de France in Mende, where we sat on the opulent terrace drinking beer and sweating, surrounded by crisp white tablecloths covered in sparkling silver cutlery.

What a great day.


Excuse the cars and Mr Clarkson, but this is the bridge

And this is the song. It's not about bridges and I'm not clever enough to have it over the film