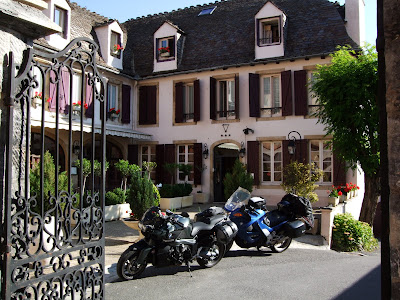 The Hotel de France really was lovely. Our room was at the top of the hotel, three flights of stairs up, and we were warned not to mark the walls as they had only recently decorated. Stone tiled floors, large rooms, luxurious bathrooms and even a little balcony, all sullied by the four of us. The tidy accommodation was littered with boots and smelly socks within seconds. AJ’s flatulence stained the bedding as normal. Mende itself is a lovely town, with a large imposing Cathedral facing a beautiful square and clean, narrow streets. Though it does have a wide one-way ring road, just like Huntingdon, off which we found a cheap restaurant.

The next day dawned just like the rest; temperature rising under a clear blue sky and it wasn’t long before we set off for Saturday morning in France’s Massif Central, the road sat like a black ribbon draped across the high open landscape. Long straights are punctuated by sweeping bends. We rode on, dispatching Citroens and camper vans.

It was easy riding, speed the only thing taxing our skills and attention on those open roads. Over hills, through valleys. Open views, forests darkly surrounding us, smooth and rough roads; all the while the heat of the day built.

We had filled up in Mende, then taken the N88 north, by-passing Le-Puy-en-Velay and onto the D906 to Ambert, where we stopped for lunch. I have written before that rural French villages and small towns are often near deserted, Saturday is obviously the exception. Our café overlooked a square where the life of the town was going on around us: old women did their shopping; men stopped and chatted; youths gathered, laughing and joking. It was a lovely insight to the heart of rural France proper, places where tourists rarely venture.

The afternoon was to become a little more eventful than the morning. Firstly, we were short of petrol and the only petrol station we saw as we left the town was shut. Arse. The D906 takes the course of the River Dore and rivers are always great to follow as they twist and rise and fall. This is how we progressed: a straight would close into a left hander, which would precede another, shorter straight before a tighter right hander, the view obscured by the rocky cliff to our right. And repeat. You could get a rhythm: visibility was good, the radius of the curve was always predictable and the surface on which it sat smooth. This went on for some miles, it was perfect; tight enough to tax, open enough to keep us unflustered. I knew the route and knew this went on for some time, though tightening the further north we would travel, it promised a great afternoon. But it wouldn’t continue.

The plan had been to leave the 906 at Giroux-Vieux, then take the D42 to Noirétable but, near Olliergues the road was closed. A diversion took us on tight, narrow, tree-lined strips of bumpy, uneven, molten over-banding. It was bloody hard work. My throttle hand was numb again and it was incredibly hot. I then looked down at my dash and noticed we had traveled 135 miles since the last petrol station: Lee’s bike does about 130 to a tank.

Nestled in the forest, Noirétable was a bleached oven. It was oppressively hot when I stopped to programme the sat nav to find a petrol station. This was my downfall. The Garmin issued more instructions into my ears in the next 100 metres than it had in 100 miles of motorway. I was getting confused, which meant I was getting angry, which meant I was distracted. I approached a cross roads, looked at the display, which told me bugger all of use, then tried to turn right. It was too late. I had stopped. The camber was too great to get my sweaty foot down. I tumbled onto the road with my bike.

The patrons of two nearby cafés were enjoying the weather, sat outside, the men bare-chested in the sun. Four moto-cross bikes were parked by the village shop, their riders stood sipping from bottles of water. I had an audience of about 30-40 people.

“FUCK, FUCK, FUCK, BOLLOCKS!!!” I screamed into my helmet. Then calmly picked up my bike, with Lee’s help (I think,) parked it and walked over to the moto-crossers and said, “Il y a une station d’essence pres d’ici, s’il vous plait?” Yep, there was. The turning was right where I’d stopped to programme the Garmin.

At the petrol station, in sickening, oppressive heat, I examined the damage, which was mercifully little, considering the bike was only three months old: tiny scuffs on the exhaust heat guard, the pannier and the crash bung thingy. After the petrol stop was one of the most farcical episodes in Flat Tyre Tour history. AJ had been caught at some traffic lights, so dropped back. I had noticed we were off-route, so turned off, to do a loop to get back on, not noticing AJ was absent. AJ didn’t see us as he passed the junction and blasted off in pursuit of no one, essentially. We waited in the shade of some trees by a play area, still suffering with the heat. After a while, I decided to go off in pursuit of AJ, only to see he him coming back the other way a few miles down the road. I turned round and returned to where I’d left John and Lee in Noirétable, where all three were reunited and facing the way I had just come. The wrong way.

Had it been less hot, or had I not dropped my bike, the ride through to Roanne may not have been so hard going for me, but it was. The roads were wonderful, a bit like the Welsh borders, with sheep grazing green fields beside wide-ish roads which rose, fell, turned and twisted amongst green hills and the odd rocky outcrop. Even the Tarmac was good. It should have been heaven, but it wasn’t. I was hot, tired and pissed off.

We stopped at the bottom of a hairpin strewn hill at Villemontais, watched some French boy-racers nearly fail to negotiate the roundabout on two of the four wheels on their overloaded, tatty brown Renault, and discussed the route. A scan of the map told us we were now officially out of twisties and had nothing but a flat, hot slog north to Beaune. The Autoroute was mentioned, but would take us far out of our way.

We passed through Roanne’s endless industrial estates, up to Digoin, along some dual carriageway with only one lane (and plenty of dead biker signs) to Montceau-les-Mines and Montchanin, where we stopped at the final petrol station, not because the bikes needed fuel, but because we needed a rest. The final section to Beaune was very pleasant and followed the Canal du Centre to Chagny, where we picked up the Route des Vins, passing the famous wine villages of Chassagne-Montrachet, Puligny-Montrachet and Meursault, before finally arriving at the Hostelerie de Bretonniere in Beaune. 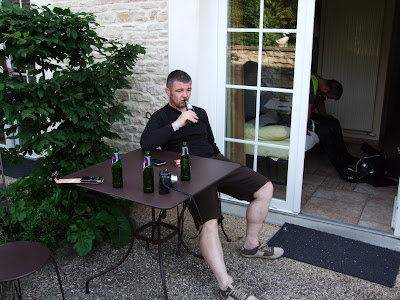 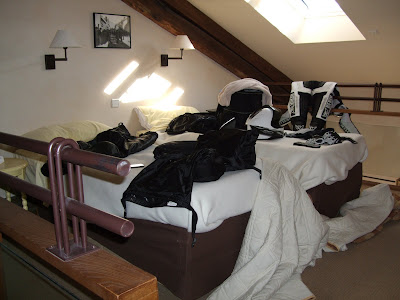 Our room was, in fact, a little apartment, with bedrooms on two levels, Lee and I went upstairs and scattered our kit around, John and AJ were tidier downstairs. White, textured walls matched with brown bedding and fixtures gave the room an old fashioned feeling which was far from homely, just a cold, drab, stop-over en route home. The last night is always a little subdued and this didn’t help. As had become habit, however, we sat and had a beer or two, in our own little garden, I even lay on the lawn outside our room, eyes closed, or occasionally staring up at the clear blue sky, which had smiled over us for the whole trip (Mr Blue you did it right, but soon comes Mr Night.) It had been a long week. We have never had such consistently high temperatures, or so many twisty roads. It was, without doubt, the best riding week we have had in ten years. It was relentless, bend after bend after bend. Bumpy, poor surfaces just made it more challenging and ultimately more satisfying. I loved it, even if sometimes I didn’t act like I did.

The last night out was spent at the same restaurant we visit every time we go to Beaune. My Boeuf Bourguignon was equally predictable. We ate well and were merry, but tired so returned to the hotel early and sober.

520 miles on the motorway is never a motorcyclist’s dream, though I do enjoy the feeling of two wheels carrying me along, whatever road I’m on. In fact I’m probably better on the motorway as rarely involves corners. It can, however be eventful, as AJ illustrated by riding into John at about 60mph, after we left the last péage. There was some minor scuffing, but nothing more serious, as so easily could have been the case. John had been minding his own business, accelerating away from the stop, so it was obviously his fault, just as AJ asserted. Certainly he didn’t hang around in the queue for the ferry at Calais to have the piss taken out of him; he wandered off, got some drinks, then was seen chatting with some old bearded bloke wearing rubber gloves with mattress in the back of his van, before disappearing for ten minutes.

We had stopped next to a coach load of German students who were happily keeping us to date with the football score in their country’s match with England.

Do you know what? That was that, really. I reckon our 2010 trip saw me acting the second most grumpy of any of our trips, but gents, I can assure you, I enjoyed your company as much as I enjoyed the places I visited and the roads we traveled. And this year was as good as it’s ever been. 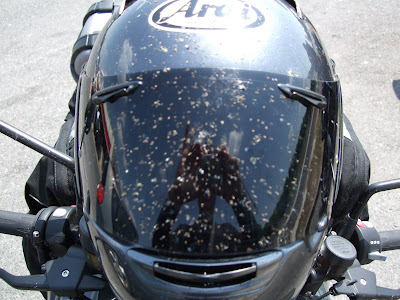