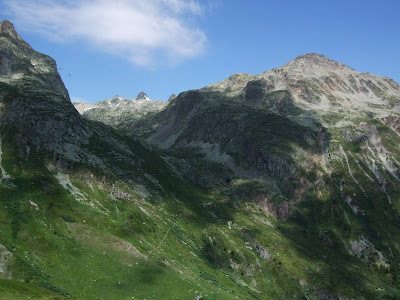 The 2011 trip was hatched on a dark, dank, winter night when four of the original tourists met at a quay-side pub in Ely to discuss and plan. Craig was never going on the trip, he came along just to have the piss taken out of him, but AJ’s untimely and expensive bike malfunction, dashed his hopes only three weeks before we left. Better then than half way up some Alpine pass in the pissing rain, I suppose. That left just Mike and I.
The day before we left, Mike hosted a barbecue for some of us. Though it rained, we carried on regardless, coats zipped up, hats pulled down over our ears and parasols protection from rain not sun. We had a great afternoon. Ah, summer 2011, I remember it well.


Mike set off down first, the arrangement being that he would get some photos as I passed. You’ll note there are none here. He photographed the hundreds of other BMW K13Rs that overtook me, and was just examining his camera as I trundled past, cursing my inadequacies then looking for a place to stop and get a picture of him further down. Just after being overtaken by another K13R, I found a layby and managed to grab this bit of photographic genius. I blame the camera. Or Mike. 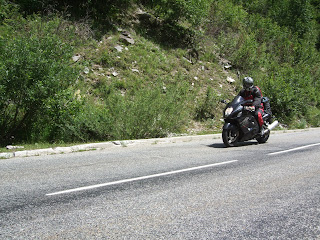 This is a pretty good road and the surface isn't bad either, I even managed to a get a rhythm going, finally catching Mike some way further down. A group of Bundes-Deutsche-bikers (there’a theme here) tagged on behind us, and were probably getting über pissed off with the pace when I slowed slowly (I do nothing quick on a bike,) having overshot our turn and ridden onto a resurfaced bit of road which was about three inches deep in gravel. They went past, taking the short, but hazardous way to Alpe d’Huez. We carried on, wanting to ride the whole of the famous road there and its 21 hairpin bends. The Glandon road continued into the valley, unusually with a couple of hairpin bends on the face of a dam, finally meeting the D1091 at Rochetaillée. We turned left and rode to Le Bourg d’Oisans where, despite a plethora of sign posts and the Garmin telling me both visually and audibly to take the third exit at the roundabout, I inexplicably took the second, forcing Mike and I to perform a U-turn about 100 yards up the road.
The road up to Alped’Huez is famous as a motorcyclist’s road, but its main claim to fame is as one of the most brutal climbs on the Tour de France. Only a few weeks later Pierre Rolland won a short but dramatic stage up the Alpe in front of literally hundreds of thousands of people crowding the roadside. Today though there were no crowds, just us, a few cars and a few cyclists. The first ramp is shockingly steep and must have been a very depressing sight for those cyclists racing up there a few weeks later. We powered up it, over hundreds of names adorning the tarmac, to the first of the 21 hairpins. The road is wide and generally well surfaced, not too taxing at all and we negotiated it fairly swiftly.
The first part of the ski resort was busy, with little apparent in the way of parking and every restaurant terrace packed, so we rode higher up the mountain, finding a less crowded restaurant, near the sports hall, for those of you that know it. 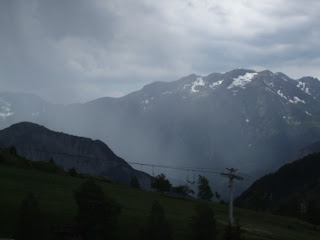 We sat and gassed and I had what can only be described as minced beef and fat on a pizza; it wasn’t that good. We had a brilliant view looking back down the valley, watching ominous looking clouds creeping up, bringing and depositing showers, before heading on, in the direction we were to take later. Inevitably it rained, though only enough for all the diners to relocate before it stopped, saving itself for later in the week.
The journey down the 21 hairpins was less fun. If I’ve said it once, I’ve said quite a few times, I don’t like riding down hill, I’m not good at it, though this time not even I enjoyed being stuck behind two very large lorries, past which there was no way. We headed now towards Briançcon, over the Col du Lautaret. I really enjoyed this road. It was somehow dry, despite the showers, and is every type of mountain road, wide sweeping bends lower down, tighter bumpy hairpins near the top, steeper straight sections, the odd flat bit, some villages and the obligatory spectacular views. There are a few tunnels too with blue lights on the walls which make you feel like you’re in a scene from Tron as you pass.

Having noticed Mike was not behind me, I stopped at La Grave and took a couple of photos but became increasingly concerned about his absence. It was only after about five minutes of waiting that he rolled in to the car park, complaining about his pea sized bladder. We continued on, up and up to the 2058 metre Col where the cafés were open, their customers milling about outside, with many motorcycles parked nearby. I know from experience that bikers watch other bikers as they pass, often commenting on the bikes, their riders and the riding. We were under scrutiny here, so I managed to cock up one of the first bends, a left hander just past a packed café. I went in too fast for comfort having been distracted by yet another K1300R in the car park. I expect it’s rider, sat at a table with the froth of another cappuccino in his moustache, wearing the salopettes that all German bikers seem to wear, probably laughed at me as I tiptoed my way out of sight.

Unusually, that was the last bend I contrived to cock up between there and Briançcon. It was brilliant. As we’d gone over the top, we’d been followed by two other bikes, but soon left them behind, speeding and sweeping our way down the mountain, through the ski resorts and into town. The sat-nav guided us to the Hotel Edelweiss by the most direct route, down a rutted track and we parked among a few other bikes.


The hotel reminded me of the sort of building you might have seen in a 1960s spy film set behind the Iron Curtain. It had high ceilings, was dark with polished, cracked stone floors and mostly brown. Situated half way up the steep Avenue de la Republique, it was overlooked by the huge fortified Cité Vauban, but had a pretty good view of it’s own, looking out over the newer part of town and down the valley towards Guillestre and Embrun. The best thing about the hotel was the maps at the bottom of the stairs. Though I could have done with a torch, I stopped and examined both, which were large and plastic with the mountains in scale relief. I’m sure that type of map has a name, but I don’t know it.

We had a beer in the bar, got showered and changed, then headed into town. There’s not a lot in the new part of town, but it was incredibly lively, with loads of people and a fabulous atmosphere. Mike was up for a few beers, I was more conservative, wanting to feel good for a full day of riding the next day. We had dinner preceded by a couple of beers and accompanied by a bottle of wine. I told Mike that if I wasn’t me I’d like to know myself, at which we started giggling. My resistance was crumbling and evaporated when we arrived outside Le Bar Centrale. There was a band playing The Verve’s The Drugs Don’t Work on the other side of the road and crowds watched, drinking beer and the atmosphere. We fetched some beer of our own and joined in.

The band played more and I visited the toilet which was at the top of a narrow flight of stairs and reminded me of a treehouse. A young French man told me that my tattoo was beautiful, so I didn’t speak to him again, but spoke instead to a British bloke I found in the throng. He lived there, having given up work in The City as some sort of computer expert. He was there with the rest of his band, the lead singer of which looked suspiciously like Gary Glitter, but without the ridiculous clothes. They were due on at midnight but, as the hour approached, the first drops of rain darkened our shirts. It was time to go. But the rain beat us, hammering down. I ran up the hill, from one bit of shelter to the next. Mike didn’t. 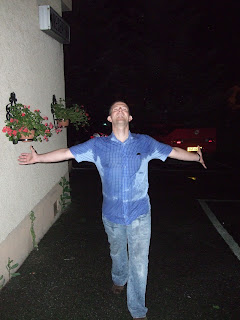 Narrative and pics are second to none. You should sell on kindle store.

Why thank you, sir. I'll contact Amazon straight away!

Yes you should be on a kindle...
That was excellent, I wish I went abroad this year! Just for the Moules, Banter, sunshine and ace roads. I love bikes!!!!