I didn’t feel too rough when I woke for the toilet at around 6am. Before I went I had a look out of the brown curtains to check the weather. Some cloud, but mainly blue. When I woke again, a couple of hours later, I felt rough, and the weather was out in sympathy. I sat on the balcony reading while Mike got ready for breakfast, and listened as a crack of thunder echoed off the mountains like a gunshot in a Western film. It was raining. Downstairs coffee, cereal and croissants were brought, and I worried whether the hotel waiter was the same person who had admired my tattoo the night before. I didn’t ask.
The weather was not conducive to enjoyable motorcycling, and we had agreed before we even left home that if we didn’t have to ride we wouldn’t. We wandered into town and established that there really isn’t that much in the valley part of Briançon. I found a cycle shop, expecting it to be choc-a-block with beautiful European bikes; Colnago, Wilier, maybe Pinarello even? No, it was a Specialized dealer. We left and wandered aimlessly through the damp streets until we found the square we had so enjoyed the night before. Armed with a coffee, we watched the world go by with its umbrella up. Sometimes the cloud would clear and we would spy the sides of the mountains, but most of the time we could see nothing but mist, rain, hardy sparrows hopping about in the puddles and the life of a small town being lived all around us. Another coffee and the awning above us was getting heavy, full of the water rolling down from above. An amusing interlude came as the waiter tipped the water onto the street below, just as a young woman ran to take shelter. The resulting wet tee-shirt could have added sparkle to the morning, but she made it un-soaked.
It was just drab and depressing, though at least the weather matched our hungover mood. We had lunch with another coffee and decided to explore the Cité Vauban up the hill. This place is certainly worth a visit. I’m sorry, I didn’t read any of the information boards, so only know that it’s the oldest part of town and is very obviously fortified. It has narrow cobbled streets, with restaurants and shops selling postcards, art, antiques and souvenirs lining the main drag. We identified a restaurant for that evening and made our way onto the battlements overlooking the town. Here we sat for some considerable time chatting about the weather and the prospects of riding, testing for the remnants of our hangovers and admiring the view. 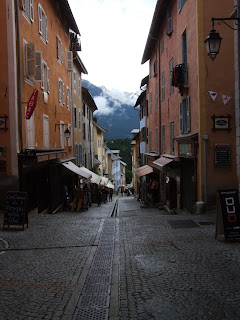 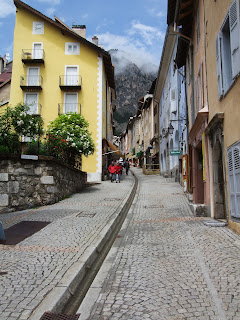 Back towards the Col du Lautaret there were patches of blue, but the weather had come from the other direction. Down the valley towards Guillestre the clouds still ruled, low ones slowly drifting into sight from some unseen valley, as if taking a peek round the corner to see if it was worthwhile floating in to hide the happiness again. The high ones, dark and greyer, ominously approaching over the mountains, threatened rain. Shall we ride or not? 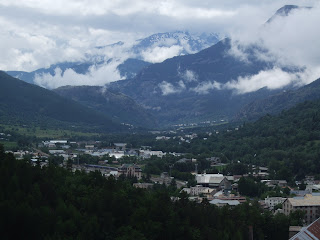 A convoy of bikes rode up the hill, past our hotel and into the car park at the foot of the fortifications, simultaneously we laughed and pitied the bloke who dropped his BMW K13S then lay trapped briefly beneath it whilst his mates parked, oblivious. That was probably the catalyst. It was 4pm, we looked at each other, rushed back to the hotel, donned our kit and left for a ride. 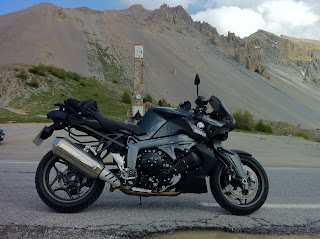 I’ve ridden the Col d’Izoard before, though on that occasion it was cold and raining in Briançcon but sleet and a few flakes of snow fell on the top. It wasn’t much fun then, but today was brilliant, well, at least going up was. It may just be my perception, but I’m sure the Briançcon side is wider, better surfaced and less steep. I managed to get a lovely rhythm going up, though I have a habit of cutting corners which, while exiting the bend on the wrong side of the road has never caused a problem (I adjust my line accordingly,) I try desperately to be correct and get the line perfect. One day I’ll achieve it, until then I’ll keep muttering expletives into my helmet. There was little traffic to hinder us and we both really enjoyed the ride. At the top it was much colder, well, at 2361 metres it would be, I suppose. A lovely middle-aged French woman volunteered to take photos of us, but I’d forgotten my camera and she struggled with an iPhone.

I love it up there, it represents two contrasts: one a bleak, though magnificent place, where the craggy peaks tower like heads with shoulders covered by a cloak of scree, where the weather could cause you trouble with little notice; the other aspect is a tourist spot where you’ll sometimes find coach parties and little old ladies taking photos during their two minute visit to the wilderness. 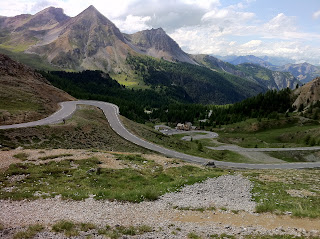 The journey down was less fun. My bike is a bit of a lump and carries a lot of inertia, so when I tried taking the first hairpin of the descent in second gear, I found myself going faster, with less power than I felt comfortable with. I braked half way round, dropped into first then carried on improving only marginally with each further bend. It went on for bloody miles and miles. It’s a truly great road, of that there is no doubt, but I think an average rider would find the lighter weight of a sports bike an advantage over anything else. I found this part of the ride very demanding and admit I didn’t enjoy it that much. The lower you go, the flatter and easier the road becomes until the junction with the D947, you enter the Combe de Queyras, a truly spectacular gorge that winds its way down to Guillestre. It clings to the rock, which at first appears dark and aggressive but gradually fades to a lighter, warmer sandstone hue. You pass through small, grey villages, legacy of the region’s quarrying heritage and a multitude of short tunnels, hewn from the rock with no apparent supporting structure. Last time down here I enjoyed it, the road had dried and there was little or no traffic, today it was busier and subject to road works which had removed the surface in places, leaving nothing but a muddy track. Consequently we arrived at the supermarket petrol station in Guillestre slightly disappointed with pretty grubby bikes. We couldn’t make our minds up about what to do next. It was quite late, so should we ride back to Briançon, or perhaps have a quick visit to the Col de Vars? 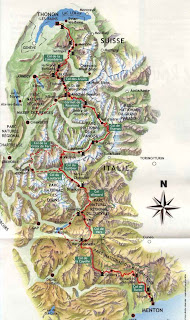 The D902 constitutes the Routes des Grandes Alpes. It begins at Thonon-les-Bains, on the shores of Lake Geneva and finishes at Menton, near Nice on the Cote d’Azure. It links many of France’s most famous high Alpine passes and includes both the Cols d’Izoard and Vars. If you ever get the chance to ride it all you will have plumbed new depths of frustration, you’ll probably have been rained on, maybe been snowed on, but you’ll finish a better rider, your heart will have sung and you will have seen enough beautiful, dramatic mountain scenery to last a life time. You should, however, be aware of an affliction called Alpinitis, defined in John Hermann’s definitive book, Motorcycle Journeys Through The Alps & Beyond (Amazon, you know you want to) as an addiction to the Alps, which draws you back over again. An affliction which meant we decided to ride the Col de Vars.
I’d last ridden this road the same day and in the same conditions as I’d done the Izoard. In fact, when we’d arrived at the top it was raining and miserable beyond belief. Today, however, it was cloudy but dry and so tranquil the marmots had ventured in quite close; their occasional bobbing heads, spotted a few yards away were invariably accompanied by their signature whistling. There was a car parked on the verge and people walking in the distance. The landscape here was entirely different from the last pass; bare rock was only visible much higher up for starters, the verdant carpet of grass, testament to the high rainfall, made the place look like a pasture, though the lumpy, rolling hillocks suggested mining works in an earlier age and reminded me of sketches of Narnia from the books of my childhood. It was a calm place.


The journey up had been great fun, the road much more to my liking, it was wider than others in the mountains, with a better maintained surface, no doubt that way to service the ski resort of Les Claux, a couple of hundred metres below the pass itself. Many of the bends are blind, though they seem more predictable to me, perhaps I’d just re-discovered my rhythm. I caught a glimpse of the most enormous view I have ever seen on the way back down. I rounded a bend and it opened out in front and below me briefly. I’d love to have stopped and tried to take it in, but there was nowhere to park. Save to say we were still high up and I could see the point where three valleys met an almost inconceivable distance below me. I’ll leave the rest to your imagination, as I don’t have the words to describe it further.
We headed back to Briançon, passing round Guillestre and onto the N94, an Alpine version of the A14, with fewer cars and a view. Oh, and the couple of hairpin bends. And a 120mph straight. Once back at the hotel, we quickly changed and headed back to Cité Vauban where we managed to find the restaurant we’d earlier identified. In good spirits, we ate another good meal, and the third consecutive for €76.60. That included a couple of beers, a bottle of wine and the entertainment factor of me snorting every time I laughed. The clouds rolled in over us as we walked back to the hotel.