What Have I Done?

I never expected to win a race. I’m only really in it for the thrill and to do as well as I can, let’s face it, when you start racing at the ripe old age of 44, you don’t expect to do anything but lose weight, get fit and develop perpetually aching legs.

As normal, I’d fretted over the weather for the days leading up to Saturday, but the rain promised earlier in the week, had cleared by the time we stood chatting on the start line. Indeed, the roads were dry and conditions were similar to the previous race. That wasn’t the only likeness, as the group didn’t work as hard as perhaps it could have done.Dave Robinson and I had chatted at the start and decided to try getting away should this happen again, but I just didn’t feel up to it, at least in the first part of the race. It was evident from the start that only Dave and someone I believe was Christophe Demoulin from Peterborough CC, were willing to put in the bigger efforts: to be fair they both did more work than me, especially Christophe who put in some massive turns, which eventually proved suicidal. He even went off the front at one stage, both Dave and I managed to go with him, but never built any real gap, and were reeled back in by the others, who proved they could ride, they were just selective about when they did it. Tactics, I believe they call it: why ride hard, when some other fool will do it for you. 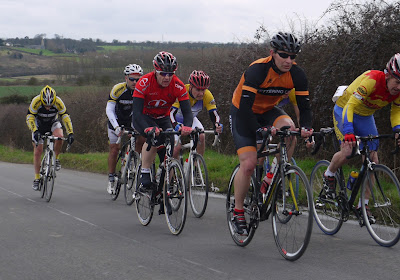 Whatever, we picked up the group ahead of us sooner than last week, about 11 miles in, which showed just how well we were going, some were dropped, others stayed with us. Having raced this course last summer, I knew it suited me. Though there’s a steepish hill a couple of miles in, it’s completely flat for the last four miles. My favourite part of the course is through the village of Ashley where a good surface helps you fly round two relatively tight, wide bends and a slight slope catapults you onto the last couple of miles of the course at a good speed.

Out of Ashley at 30mph on the flat with 50 seconds lead on the faster riders, closing us down. Touch and go if we’ll make it. I took my turn at the front, everyone taking a turn, I found myself at the back of a long line of riders, all on the limit, scenting success. Was I too far back? Probably, but for some reason I wasn’t bothered. Round a bend and there were two horses in the road, though they tried to give us room, we all slowed. At the back I carried more momentum, slowed the least, when the road was clear I was back in the middle, about fifth wheel, powering towards the final 1km. It’s all a blur now, I remember saying "pain" over and over like a mantra, convincing myself to give everything. I looked over my shoulder and saw we had a gap, five of us, about seven more behind. Round the bend, onto the final 300 metre straight, I could see the chequered flag poking from a huddle of people waiting for the action. I was behind Christophe, who’d spent most of the last 5 miles leading the group, someone in white was on my right, others outside him. I desperately wanted to be conventional, obey the rules of the road and overtake Christophe on the right, but I was blocked and they were launching their sprint for glory. I’ve no idea if I changed gear, but I passed Christophe on the inside, and gave it everything I had. It was a long, long way to the line now. I felt my wheels spinning, my legs flexing: I knew I needed to pull and push on the pedals, that I should get lower to the bars. But I couldn’t. The excruciating lactic burn in my legs dominated me, but I kept going until weakness won and I sat down, pedalling but expecting to be passed any moment. The nearer I got to the line the more I realized I would win. I began wondering what to do. Should I throw both hands in the air? What about a one handed punch, making it clear I was too fatigued for a full on show of triumph. Just a shout of joy? I crossed the line, shoulders rolling and face like I was crying for my Mum. I let go a couple of loud shouts of “Yes!” Then found myself saying, “Oh that feels so good. Oh that feels so pain.” Hideous grammar, but spot on.

Stopped over the line, elbows on the lever hoods, head over the bars, breathing hard, legs numb. On my own. A winner. Really? I wasn’t expecting that when I ate my porridge. 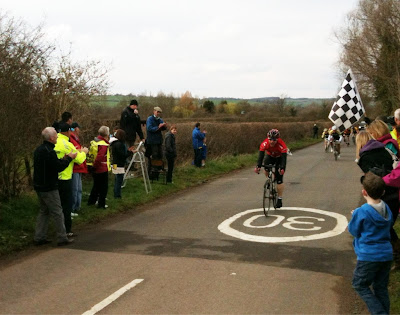 Best wishes to those riders injured in the last lap crash.

Hmmmn, the last lap crash you say? So you managed to get away with the old stick in the spokes trick then?