What Am I Doing?

... a question I asked myself on the drive along the A14 to the first race of the year. I’d caught myself asking this before, but now, with my 46th birthday only three months away and a new season started, really, what was I doing? Had I done enough training? Had I done the right training? Had I eaten enough? Had I eaten too much? Was I plain old too old? Was I just a rubbish cyclist?
I was en route to the first of a five race handicap series, where the riders set off in groups depending on ability. So the slow, fat and less fit riders go off up to ten minutes ahead of the most fit, fast and talented riders. In a positive frame of mind, I used the hour long journey to contemplate all this and all I managed to surmise was that this was not going to be fun and humiliation was the probable result of my impending and puny effort.
Arriving, I felt no better. Those around me were obviously experienced and knew what they were doing, even the fresh-faced riders from Loughborough Students CC. Childish insecurities maybe, but I felt entirely out of my depth, just as I did when floundering in the deep end during my Cub-Scout swimming badge test in 1976. I signed on and read of the handicapper’s grave error, placing me in the fourth of six groups, giving me kudos for fitness and experience I really don’t have.
The casual chat of club mate Mike relaxed me on the warm up ride to the start and I felt OK as the first three groups set off. Any feeling of confidence didn’t last long, as the initial pace was horrendously fast; a well organised group of those students, their earlier confidence fully justified, blew our group to bits. Off the back within five miles, I was left panting and contemplating the not unexpected ignominy of spending the afternoon riding round on my own, or arriving at race HQ hours before any other rider, then furtively escaping in my car before anyone noticed. I don’t expect to win, ever, but I don’t want to be last.
Over the ensuing miles, I found myself overtaking the odd rider, and eventually being caught by the group who started three minutes after me. I tagged on with them, finding a good pace for a while and making sure I did my share of the work. Sure enough though, my earlier labours took their toll and, a couple of slightly alarming, though small vomits later, I pulled out of the line and had a rest. A short pause for reflection, and resigned as I was to failure, I stood, pressed on the pedals and got back up to speed, determined to finish. Again, I picked up a few riders, including Nigel, another club mate with whom I worked until the finish, though he won the uphill sprint for 32nd place.
The second race of the season was on the same course and, despite the rigours of the previous week, my journey was not complicated by self-doubt, just panic at the realization that much of my intended hour for changing and warm up was being lost in a traffic jam.
Sign on revealed the handicapper had realized the error of his ways, placing me in the second group; much more to my liking. The initial pace was again fierce until one of our number, obviously the handicapper’s mate, escaped to win the race with a lead of 1.25. As he disappeared up the road, we collectively relaxed a bit, though some more than others, our group not working together as well as it could have, with three of us left to do the majority of the riding. We were moving pretty quickly though and, when I saw Dave Robinson, from Kettering CC crest the top of a hill well ahead of the group, I went after him, shouting, “We’re away, we’ve got it if you want to!” This was my first ever break off the front a group and it felt liberating: however, now the seeds of both hope and dread began to form in my mind. Hope, because it would be great to go all the way to the finish; dread because, if we did, it was going to hurt quite a lot.

After a mile or so, I checked over my shoulder a couple of times and noticed we had a reasonable gap, but with the road ahead turning into the wind then crossing an airfield, I didn’t expect it to last. Dave asked me if I thought we had a chance of staying away, it was unlikely and I told him so.
Swallowed up, we carried on the routine, soon picking up the first group on the road, which had set off three minutes before us. Not many of them wanted to work either, though one of those who did was a woman so small, following her gave no shelter at all. Crossing the airfield for the last time, a glance backwards revealed the swarming mass of the rest of the race closing in. They were however, a good distance back and we only had about four miles to go. We might do it.
We swept through a junction onto the main road, I was second wheel and felt a tap on my back as Dave flew passed me. One last ditch effort? OK then. Out of the saddle, accelerating I got onto his wheel as we began to drop into the village of Welford. I’ve no idea what speed we were doing, but it was exhilarating, wind and the whoosh of tyres on tarmac the soundtrack. A quick check and I saw the wheel of a following rider close behind. There was no getting away this time, but at least we’d tried. Second wheel, behind someone else now, I took the left turn at the bottom of the hill for the last time. I was whooping with joy, it was brilliant, bike cranked over at about 25mph, and I told a marshall as, out of the saddle, I accelerated up the hill, out of the village one more time.
At the business end of the race now, I found myself on the front, not for long as I was passed by someone with a solo finish in mind, but his effort didn’t last long as Dave overtook him. We powered on, but the catch was inevitable, and we were soon passed by a heaving mass of bikes and panting riders. I pushed my way into their line and shouted at Dave to do the same. I don’t know if he did. We dropped down the final hill, round the bend into the darkness of the trees, passing the 1 km marker, the whole race, 50-odd riders together in a seething mass of sweat, colour and spinning wheels. I couldn’t force a gap to shelter from the wind and save my legs, but it wouldn’t have made a difference. A group went, going for the sprint. Out of the saddle too, the lactic burn in my thighs was too much and I sat again, clicked up a gear and rolled over the line. Panting, hurting, thrilled and happy. There’s always next week. 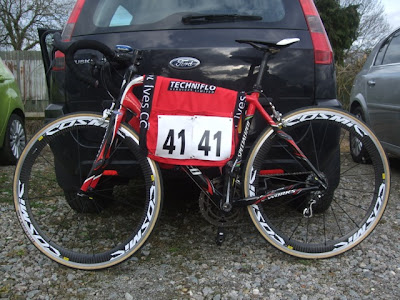 Thanks to those at Kettering CC for their help with first photo.