This Is The Road To Huy

For information, this entry has very little to do with two wheels, but I wanted to write it, so I did. 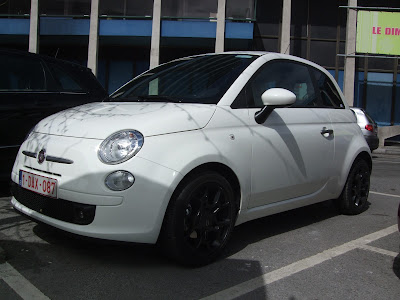 4.15am is an unreasonable time of day to get up whatever the motivation, but when it’s for recreation, it’d better be bloody good. The reason for such an early start wasso I could travel to a small, nondescript, industrial Belgian town, like we all do for a day trip. My trip wasn’t completely pointless as I was visiting a bike race to get a taste, watch it and write about it.
The M11 and M25 were unusually free-flowing, even for ridiculous o’clock, and I arrived at Ebbsfleet International station in a light drizzle, weather that was forecast as the best to be expected throughout Northern Europe, just as well my water proofs were in my rucksack. I checked in and went through the airport style security check, luckily my new jeans didn’t fall down when I took my belt off.
On arrival at my pre-booked seat, I found an Arabic looking gentleman asleep and snoring loudly in my place. I decided to leave him to sleep and sat down, having retrieved my headphones so I could listen to some music, though before I did, I stared out of the window at the Kent countryside and listened to the idiot in front of me. I’m not normally disparaging on here, but this man deserves it. It seems that he and his companion, a slightly large woman in her late twenties, were heading to Brussels for some sort of governmental conference. This young man, similar in age to the woman, skinny, dressed in a suit and constantly looking at his phone whilst she was talking to him, had an incredibly high opinion of himself, been everywhere, seen and done everything. I wanted to hit him and felt smug when he commented on a Police dog waiting for us at Brussels. I was able to correct him on its breed, “Oh, he actually knows,” I saw him think, as I undermined him in front of his slightly overwhelmed colleague. I then strode off up the platform.
I love travelling, just the act of going somewhere beyond routine, captivates me and a train is a good way to do it. You can sit and literally watch the world go by, the only stress being that which boarded with you and the distant fear of derailment and consequent death. For me it’s a chance to do stuff I don’t normally: read a book; listen to my iPod; nothing. Seeing tiny French villages flash past, spotting the small market square, a war memorial, perhaps a cafe, is a privilege, a brief glimpse of the soul of each community. Like looking into the eyes of a stranger.
I can speak a very tiny bit of French, which, it became apparent, is the language of Brussels, even though it is situated in a sea of Flemish. Luckily the woman at Hertz car rental spoke perfect English, and gave me the keys of my Fiat 500, the reams of useless paperwork which always accompany a hire car, two cards and strict instructions on how to use them to get in and out of the car park. By the time I got to the car I had lost one of the cards and was stranded, frustrated and mumbling a stream expletives. This phase of the day was going well, I cursed.
Eventually I escaped into the Brussels traffic, staring frantically at my sat nav, waiting for it to locate me and send me on my way. Eventually it did and I was negotiating my way through the bustling streets of Belgium’s capital, getting caught at what I decided was an unreasonable number of red traffic lights. Onto the autoroute, it was time to get used to my car.
It was white, comfortable, small, and the buttons for the electric windows were in a strange position on the center console. When trying to pull away, it seemed to want to control the engine revs itself meaning it needed a fair bit of gas to get going. The 1.2 litre engine sounded like a cat trying to intimidate me by purring, the gearing was difficult to get used to, and I noticed that it was running at about 3250 rpm at 70mph, which is less stressed than my 2 litre Mazda 5, a car I can justify hating.
The Belgian auto routes are OK, considering my proximity to the capital, there was little traffic and, though they have regular warnings of speed cameras, I didn’t see one. The day felt autumnal, the over looking trees were just coming into leaf, but their colour gave the hint of brown, the atmosphere not helped by the greyness of the sky, though it didn’t rain. I headed south towards Namur, a town I remember riding through on my motorbike in 2006, then turned east in the direction of Liege, leaving the road before I got there at the second junction for my destination, Huy. I’d taken the second exit as I figured there were less likely to be bike race related road closures. In fact, there was no sign of the race and I managed to get into town un-hindered, the only indication one of the top World Tour races was in town, were the tell tale black arrows on yellow signs which were evident as I drove into town.
If you want to read about the race it's my previous entry (or check here) but when it was over I wandered back down the hill and across the bridge to the Fiat parked outside a tatty supermarket and by a bus stop. En route I passed a group of teenagers, the boys carrying a crate full of empty Jupiler bottles. They were laughing and joking, the girls, lagging behind, giggled, all of them happy, comfortable and well-behaved. 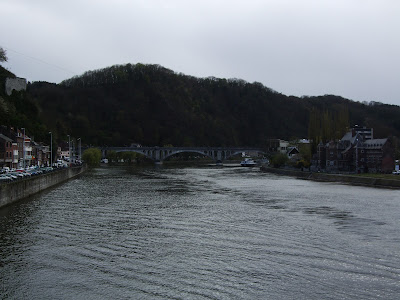 Sat in the car, watching the wipers scrape their way across the windscreen, I considered the numbers of people I’d seen lining the race route, and I expected the traffic to be heavy, but the hour it took to travel about 5 miles got me anxious about making my train in Brussels. It took about an hour to cover the five or six miles out of town and onto the motorway, where the tension dissipated and I managed to get going at speed.
I had considered not filling the car up with petrol as the gauge hadn’t moved at all during the journey, but when it dropped one blob on the digital readout, I decided to stop at a motorway service station. It was full in an instant and I was pleased that the total cost was only €18, and that included a Snickers. It may not be a good motorway car, but at least it’s frugal.
It was hammering with rain when I the bright flicker of brake lights appeared through the gloom. I was on the outskirts of Brussels, and not far from my destination, but time was running short if I wanted to catch my train. Stationary for minutes at time, the sound of rain banging on the roof above me, I took a moment to ring my wife and rant about the traffic. The train was the last Eurostar service of the day and if I missed it I would lose the non-transferable fare, have to pay for a hotel, and pay the fare for whatever train I could catch in the morning. I was not happy, even if my wife was more sanguine.
As it turned out, a little frantic and barely acceptable, let alone legal, driving saw me throwing the car keys at the bloke in Hertz car rental office, then running to join the Eurostar check in queue about two minutes late, with many other similarly flustered looking people also complaining about the traffic.
The journey was uneventful: I downloaded and sorted my photos, managed to write a paragraph or two about the race, and chatted briefly to a young lady who had been to Belgium to see if she was good enough to get herself on a dance scholarship. Mostly I stared out of the window, watching the light seep away through thick grey clouds, leaving behind only the sound of rain splatting on the windows as we sped across Northern France. Expecting all the other passengers to get up and of the train, I nearly missed my stop at Ebbsfleet station because they didn't. Indeed, only about four others alighted there, and I was soon back in the car driving home where, having spent all day travelling to and watching the race, I watched it on a TV and struggled to write some words, any words, about it which made sense. It had been a long, busy day and, as I hadn't had time for a beer in Belgium, I made time for one before bed.

Email ThisBlogThis!Share to TwitterShare to FacebookShare to Pinterest
Labels: Travel