It's a Mini Adventure

Riding to work last week was a pleasure. Everything from pulling on my leathers to parking outside the office felt good. It wasn't cold either, even wearing my vented jacket, my EDZ inner shell was plenty to keep the cool morning air at bay, heated grips took the chill off my hands. It would be warm later. Riding along the A14 I felt as if I was going somewhere, doing something, not the sort of feeling driving a car to work inspires. It felt like an adventure, anything but mundane. Then again, every ride has that aspect to it; a slice of adventure.

The ride felt increasingly like the first morning of my annual motorcycle tour. With the warmth, mist and unusually sparse traffic, I could have been beginning a long day south towards the Alps, or even rolling out of some nondescript Gallic town, leaving behind another cheap hotel and its rough brown blankets, heading for the twisties, waiting for the sun to burn through to reveal huge mountains, their shocking white peaks stark against a deep blue sky.
Talking of which, it’s only four weeks until two of us will roll off the Euro Tunnel train, blinking like expectant children, beginning an epic 550 mile ride to Chamonix. I normally start planning a trip just after the last one has finished, but this year I’ve let things go. I’d usually have the ferry booked by January, the hotels sorted soon after and detailed routes inputted onto Garmin Basecamp by mid Spring. Not this year. I’m not going to bother with routes, we’ll sort them as we go, maybe. Hotels are booked, but we’re staying with a friend for the first two nights and I don’t yet know where. There are some high mileage days and some short days, and even a day we don’t even have to ride anywhere; maybe a lie in, followed by a walk in the mountains. Other than the first day, I reckon the day from Luzerne to Heidleberg is likely to be the hardest, especially with the whole of the Black Forest to negotiate on the Schwarzwaldhochstrasse, the B500. To cement our reputation as international travellers, our last five nights are in five different countries. One thing that is sorted is those who are coming and there’ll only be two of us for the second consecutive year, the price of petrol and the exchange rate mean the cost of the trip has ballooned over the last few years, and in these financially constrained times, the expense is just too great, perhaps even for me; I don’t know if there’ll be a next year.  With most things arranged and the ride visiting some of the most advanced and civilized countries on the planet, it’s not The Long Way Round, or even (better) Mondo Enduro, but it’ll still be an adventure of sorts.
And that’s the point. I know that driving round such a route would be an adventure, I’ve done it, and I assure you it was brilliant. But in a car you are isolated from the World and all it has to offer, good or bad. Cars are humdrum, mundane, boring, normal: home. You can’t smell the patisserie you pass, hear the shouts of playing children in a school playground, feel the heat or cold of the day, or even have to think about the weather other than the rainy walk from the hotel with your cases. You don’t visit, you pass through. Whether it be a ride to work, the opticians or 800 miles in one day to the heart of the Alps, virtually any journey on a bike is some sort of adventure. 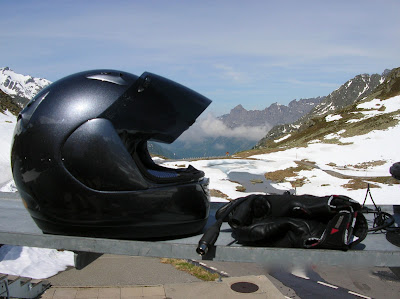