A Look In The Mirror

Sparked by Brad Wiggins’ tumble, and that of his coach Shane Sutton, cycle safety seems to have been everywhere over the last week or so. Cycling forums have been alive with comment, websites and magazines have fed readers’ indignation, sometimes justifiably, sometimes not. Even mainstream media, carried by the blast of the post Tour and Olympic cycling explosion, has been alive with stories and phone in shows examining the perils of riding on the road, attributing blame variously to ignorant cyclists or impatient drivers.
I do a fair few miles on a bicycle, about 5500 each of the last few years, most of it rural. I have seen some terrible driving, had cars pull out on me, had vans pass so close I could have checked for rust bubbles under the paintwork, and felt lorries overtake on blind bends, close enough to suck me under their wheels. I have reacted in a variety of ways, from a resigned shake of the head, to accompanying wild gesticulations with a string of obscenities. Largely, however, drivers are patient, courteous and even forgiving when I occasionally get something wrong.
Motorists seem happy to take a risk, safe in the knowledge that should it go wrong, all they’ll damage is their paintwork, not flesh and bone. Many drivers are unable to anticipate what a bike will do; unwilling to wait a couple of seconds more; cannot judge the speed of a bike; some just fail to see. Mind you, SMIDSY (sorry mate I didn’t see you) doesn’t just affect cyclists, every day it happens to motorcyclists. Hell, it probably happens to cars too, but we don’t hear about that: a quick exchange of details and they’re on their way.
Cyclists are not always the innocent party in all this. I remember seeing a club mate, perhaps too lazy to unclip his shoe, maybe unwilling to lose his momentum, dart straight across the front of a moving car. The driver did nothing, in stark contrast to what would have happened had roles been reversed. We are not perfect.
In the aftermath of those high profile crashes, some blamed cyclists for their own misfortune. One assertion was that wearing a helmet would have prevented an incident, clearly utter tosh. Some said, “What do you expect, if they don’t wear a yellow jacket, how am I supposed to see them?” Open your bloody eyes, that’s how.
The cycling camp struck back, saying that the victims were being blamed for the incompetence of others. We shouldn’t need to wear a helmet, education is the key they bayed. They’re right, but that’s naïve, why not wear a helmet? Why not give your skull the best possible chance? Especially if you know the idiots are out to get you. It’s not your fault your helmet just shattered against the kerb, but at least you’re able to call the driver an impatient, myopic fool.
Arguments have polarised opinions, created sides. Many drivers cycle, most cyclists drive. There should be no sides. Cyclists need to be as aware of drivers as we wish they were of us. Only then will errant motorists take their share of responsibility and allow safety to improve.
To finish, one of the most ridiculous things I heard was that cyclists would all be much safer if they had mirrors. Why? All that would do is allow riders to know when they were about to be killed. “Sorry mate, I didn’t see you. Hello?” 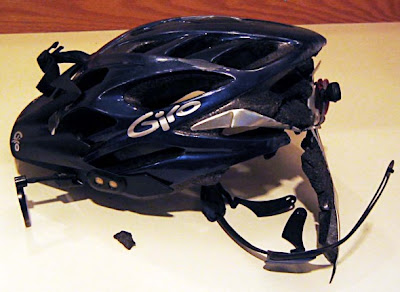