This entry first appeared  on road.cc earlier this year

As we stood by the roadside or sat in front of our televisions watching Jonathan Tiernan-Lock become the first British rider for many years to win the Tour of Britain, how many of us thought about the organisation which allows the race to take place safely? How long it takes to plan and what those involved do. One aspect of this is how to make normally busy roads safe to race on. The Pru-Tour, a previous incarnation of the national tour, suffered two major incidents in its short existence, in the first a car ploughed into the peloton injuring three riders, in the other PC Dave Hopkins, a Police motorcyclist escorting the race, was killed when a vehicle pulled into his path.

In 2004 the Tour of Britain was reborn in its current form and, despite the earlier tragedy, motorcyclists remain an intrinsic part of the fabric which allows the tour to function. One of the Police motorcyclists working on that first race was Inspector Bob Brayshaw from West Yorkshire Police. Now responsible for projects such as accredited marshals and revision of the 1960 Cycle Racing on the Highways Regulations, Bob is now the Association of Chief Police Officers’ liaison officer to British Cycling. He organised and commanded the Policing operation for all the London 2012 Olympic road events, and has done the same for the Tour of Britain since 2007. “During the first three tours, 2004-07, each force did its own thing,” said Inspector Brayshaw. “It was a bit disorganised, with no consistent approach, those working on the race varied from day to day, stage to stage. In 2007 I was asked to sort it out nationally.” The job is to run an operation which keeps the route safe for the riders and race convoy and minimises the impact on the public, “To provide the best possible race track.” 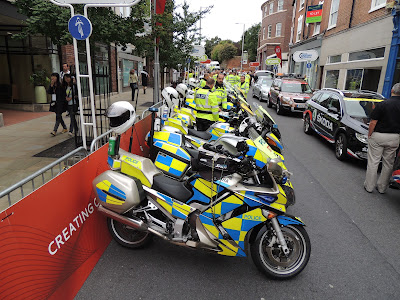 At Bob’s disposal are 28 Police bikes, all present for the entire race, and 28 Moto Marshals from the National Escort Group. All 56 are trained to advanced level, and the Police Officers are experienced and qualified in escort tactics. To create the sterile zone required for a major international cycle race, 22 of the Police bikes control traffic, they are commanded by two Sergeants, ensuring each of the bikes are in the right place at the right time, and backed up by 10 of the marshals. Working in a caterpillar, the first bike will cover a junction until being relieved by the second, who in turn is relieved by the third and so on. “This system is good, as you don’t miss things,” says Inspector Brayshaw, “it keeps the overall speed down and it reduces overtaking to none. When there are up to 80 motorcycles working in the bubble, with Police, Motos, TV and press, this is important.”

You’ll see the remaining four Police bikes on the television coverage. Responsible for peloton safety, “Their role is as 'back stump' to run just in front of groups of cyclists to catch any last minute things that hasn't notice 22 sets of blue lights and sirens. It happens!” The remaining NEG bikes are those you see blowing whistles and waving flags in front of parked cars, bollards or any other static hazard.

Bob and his assistant, Sergeant Grahame Doherty, run all this from a Police car running a couple of minutes ahead of the race. They command the operation using two radio channels and mobile phones, as well as race radio used by the organisers, commissaires and team cars. They also have someone way ahead of the main group which is responsible for calling in any unforeseen hazards which might require special actions, and rear car which marks the back of the event.

Organising starts when race organisers, SweetSpot send the proposed route to Bob in March each year, he will then drive each stage. “The first time I do a stage, I don’t put pen to paper,” he says, “I just have a look to see if we can do it. I’ve always said we can go anywhere.” He will drive the route at least three more times, noting every junction, traffic light, pedestrian crossing. Even cemeteries or crematoriums are notified that the road will be closed. The result of all this is a book listing each of those details and the corresponding mileage. Printed on waterproof paper, so the bikes can strap them to their petrol tanks, the book is 56 pages and there’s one for each stage.

Stage 2 was run between Nottingham and Knowsley Safari Park on Merseyside. With Nottingham Castle standing sentry, spectators gathered to witness riders assembling for the sign on and start. On the far side of the line, 28 Police motorcycles had parked neatly, riders checking kit and talking amongst themselves, though as race radio counted down the minutes, most roar off, leaving those remaining sat astride their bikes, chatting with the crowds lining the city’s streets. 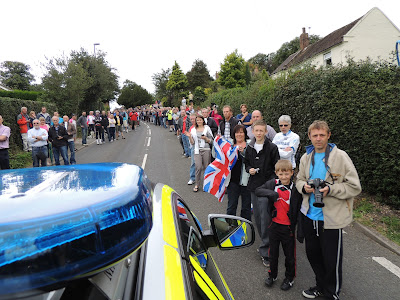 As the race paraded out of town, along the 7 mile neutralised zone, the crowds thinned, but the work the outriders needed to do does not relent. The radio was busy as the Sergeants set the tone and encourage a rhythm to be set. In the car, Bob’s role is an overarching one, the job must be done properly, but he speaks on the radio only rarely and often with humour, he doesn’t want to excite those listening, “Come on, keep moving. Remember, if you’ve got a bike in your mirrors your shouldn’t be there.”

Once the race passed the blue Kilometre One banner and the race began the climb into the Derbyshire Peak District, the junctions needing Police attention became fewer and farther between, sometimes allowing the bikes to get up to five or six miles in front of the peloton. But the start of the race proper brings new challenges, with a break of six riders moving clear not long after the hostilities commenced. This meant the peloton safety bikes were thinly spread. A breakaway is hardly a surprise in a race, so there is always the contingency to drop some of the junction bikes back to assist, though only when the moment is right and the gap big enough. “We police the gap by feel,” says Bob, who makes any decision to drop officers back, but leaves the running of the peloton bikes down to the most experienced Constable of the four. 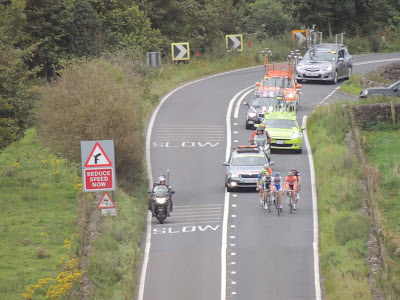 And so the race settles into its routine: passing empty schools, pupils on the roadside waving flags and cheering, their teachers standing guard. Through villages and small towns, streets lined with flag waving crowds. Up the climbs more hardcore fans endure the weather, some dressed in their lycra, bikes leant against stone walls or grassy banks behind. The police speak on the radio reduces, one officer even stops to put his waterproofs on. Cattle grids, wet descents, diesel, parked cars are communicated over the police and race radios. Not even broken motorcycles, one with brake fade from overuse, another which keeps jumping out of gear, prevent the operation working seamlessly. Each one will limp to the end and another will be collected from the local force, pre-warned, just in case.

Police bikes lead the way into Knowsley Safari Park and only then, as the big BMW 4x4 turns left through the Deviaton, about 200 metres short of the finish, is there any sense of relaxation. “Well done Gents, great job,” calls Brayshaw on the radio, just as Mark Cavendish is piped to the line. Parked at the rear of the podium by the team busses, the competitors cruise past covered in road grime, heading for comfort. The Police officers park their bikes where they can, someone stole their allocated spaces, then crowd round the Beemer drinking coffee or hot chocolate. Like the racers in their busses and cars, they chat excitedly and compare stories about the day, though unlike the previous stage when they had been delayed searching for a lost child at the Norfolk Showground, within 45 minutes they’re back on the road for the long transfer to Carlisle.

UK Police forces are under pressure in may ways, releasing officers to help with what is essentially a very large minority sporting event takes faith, even if, like other sporting events, they are not provided at the tax-payers’ expense. This faith has been repaid by the sport itself, with its profile raised immeasurably by home riders’ performances but, without the professionalism and commitment of Inspector Brayshaw and his team, the Tour of Britain would not be the event it is. It would not be on the programmes of some of the World’s top riders and their teams. And it would not have been one of the most entertaining one week tours of the season.