Nestled in a shallow valley in the countryside near Ipswich, Somersham is typical of many English villages. There are coloured thatched cottages often found in this area, a pub, a cricket pitch and fairly new village hall built on the outskirts. Despite some newer houses detracting from the idea of an English rural idyll, the village still retains a sleepy feel, where a steadier pace of life clings on despite the rush all around.

The village hall is new but obviously well used, that shiny new smell replaced by one redolent of school assemblies sat on the dusty floor. Empty, the hall would be a soulless place, just a shiny floor and an echo, but today it’s the home of the Stowmarket CC road race. On a table at one end, plastic race numbers, a safety pin at each corner, are piled neatly in front of two people, both of whom are wearing yellow club jerseys. Beside the numbers is a cash box, three or four signing on sheets and a card box full of race licences, all neatly separated by alphabetical index cards. 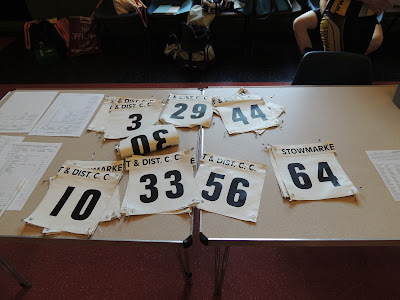 Possibly inspired by the economic need for cheap transport, cycling is thriving in the UK, with an obvious increase in bikes on the road. This boom is reflected in the numbers racing, it can be difficult to get a place in a race, especially early in the season, when ambitions and spirits are high. It’s not just the fantastic successes of this summer which caused this increase in interest; there was the amazing performance in the previous Olympics, since when Mark Cavendish has been chipping away at the public consciousness. The sport is becoming increasingly mainstream; even BBC Radio 5 announces daily news from major races. The bottom of Britain’s road racing pile is a million miles from the world of cheering crowds, advertising hoardings and team cars seen on televised races. These events rely on volunteers to organize and staff them, with little in the way of resource or back up, relying on goodwill and commitment.

There’s a buzz in the village hall: people stand in groups, some with the straps of their shorts trailing behind them, others sit quietly massaging embrocation into their legs. Jerseys hang on plastic chairs, shoes peek out from beneath, helmets and glasses on the seats. Through a hatch, in the kitchen, cups clank against each other and two middle-aged women busy themselves arranging metal teapots and plates of cakes.

Riders in their socks shuffle past a note taped to the door instructing, “no cleats in the hall,” leaving Ian Doe to brief the marshals before they head out on bikes or in cars to take their posts. He’s been a commissaire a few years now. His grandfather raced, he raced and the sport is in his blood. Work and family put a stop to racing but, when life gave him the opportunity, he returned to the sport as what is effectively the referee, though he sees his job primarily to ensure the safety of the riders. His grey shirt, branded with the British Cycling logo, is the only sign of professionalism in the room. It’s not that people don’t care or do a good job, it’s just the Corinthian spirit reigns supreme here, it’s done for the love of it, and perhaps because it’s a condition of club membership.

On the road, a convoy of disparate race vehicles leads the riot of colourful jerseys through the village onto the 6 mile course for the first of seven laps. Under blue skies, passing thatched cottages, golden fields, through canopies of verdant green, the riders whoosh and clatter over typically varying surfaces, along narrow and slightly undulating roads. Marshals with red flags hold traffic by sheer will, and take the insults of those too red faced and impatient to wait a few seconds. 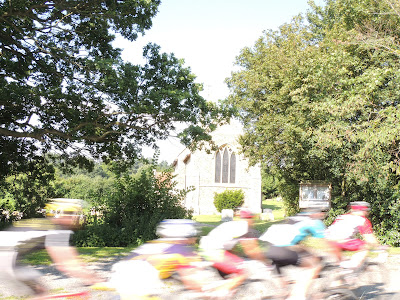 Over the top of a small hill, the finish line is stretched across the road just by the entrance to a farmyard, which is full of supporters’ and marshal’s cars, ten or twelve of them. The crowd, if you could call it that, comprises of wives, children, mothers and fathers of the competitors, though a few local riders roll in late on to see the action. Two young boys play with the chequered flag they’ll wave at their Dad in a few minutes. Race organizer, Graham Berry occasionally glances down the road, as if willing the riders up the hill and over the line. He chats with those around him, occasionally stabs a foot at the finish line, ensuring it was stuck to the tarmac, then glances down the road again. He’s far from nervous, he’s been organising the race for eight years and has it off pat.

With minutes of the race left, it’s obvious he’s done his job well: no crashes, no incidents and the riders are on their way. The race’s only accredited marshal strides over the line carrying his signs and enforceable powers to stop traffic, obviously aware of his own importance. He disappears round a slight bend in the road. We wait.

Orange lights flash on top of two nondescript family saloon cars crossing the line. Silence. Then, from the darkness of a tunnel of trees one rider emerges alone. He crosses the line with enough time to ease off and raise his arms, displaying not sponsor’s names, but that of his club.

At the village hall Colleen Buckle serves tea and cake. She describes herself as the club Membership Secretary, Treasurer and a control freak, though she shares the first two with her husband, the second is the reason she does the teas: “If I don’t do it, no one else will.” Each club member is encouraged to bring a cake, women and family men bring home made ones, single men’s cakes are pre-packed. She explains that the club only had 25 members 6 or 7 years ago, but now has over 100. Meanwhile, Colleen pours another cup of tea and puts another slice of flapjack on another paper plate. 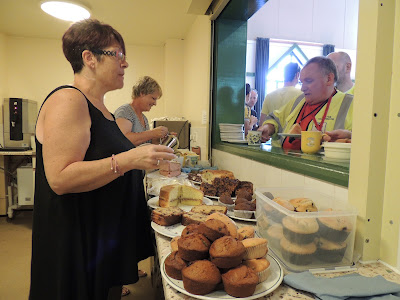 Cycling enthusiasts, pundits and cognoscenti talk of cycling being a European sport, it’s heart in Belgium, Italy, France and the Basque country. Grainy monochrome photos of grimacing heroes, tyres wrapped around their tortured bodies as they grind along unpaved gravel roads, snowy mountains their backdrop, give this illusion life. But ask a British Cat 3 road racer. Their sporting life is spent in village halls like the one, their races organised and policed by volunteers, they ride on bumpy country roads, pass thatched cottages and flint churches, then laugh and drink tea afterwards. The sport takes on the characteristics of its place and British racing is a British sport. The soul of the sport may be elsewhere, but its beating heart is wherever numbers are pinned on and battle joined. Sipping his tea after the race, the day’s winner explains, “I love the atmosphere of racing at this level, its Englishness, village halls and cakes, it gives me hope.”

this was first published on www.road.cc