Do They Cut It?

After spending most of last winter crouched by the roadside swearing and changing inner tubes, this year I was determined to find a tyre which would allow me to spend more time in the saddle, so after much deliberation I overcame a petty prejudice and bought some Continental Gatorskins. While the Continental website claims this tyre is the UK’s most popular 700x23 tyre, it also recommends a fairly hefty £34 price tag, but they are hardly a rarity and I have not seen them for that price; discounts abound. 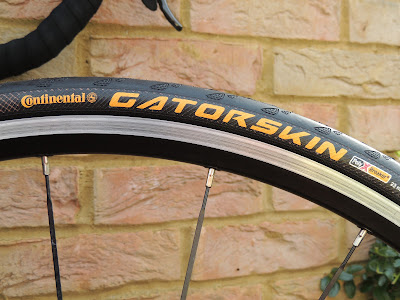 Continental describe these tyres as the ultimate winter or training tyre and supply it in a variety of sizes, with both wire bead and folding versions. My folding 700x23 weighs in at a claimed 220 grammes, reasonable for a tyre supposed to be nearly impervious to punctures. This lack of weight is evident on the road as the Contis spin up quickly and are relatively fast, obviously helped the slick rubber down the middle of the tread. Continental claim that rubber compound and distinctive the tread pattern are designed to “perform well in wet and wintry conditions” and, though I may not throw a bike about like a pro, but I’ve not had any twitchy moments, despite the deluge Britain has suffered over the last few months.

Continental have used their Poly-X-Breaker puncture protection in the Gatorskin which, other than an exceptional mystery cut, has been has been effective so far: The are no nicks in the rubber and I’ve not had one normal puncture. The sidewall is reinforced with what the German company calls Dura-Skin, apparently to reinforce against tears. I find the ride slightly harsh, transmitting more of the road’s imperfections to my backside than I’d like, and wonder whether this is down to the extra-strong and distinctively coloured sides. I have no idea how the large cut mentioned above occurred and I didn’t actually have a flat, but it consisted of a large tear across both the sidewall and tread, through which the tube poked like a little black pimple. 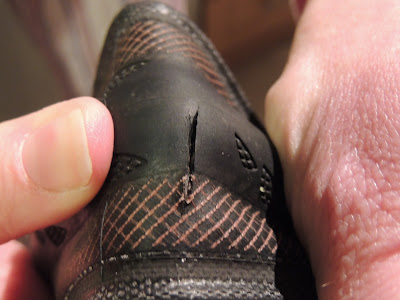 My faith in these Gatorskins is such that I replaced like with like, which was so simple there was no swearing, only mild wonder at how quickly it was all done. These are winter tyres and I can live with the firm ride if a tyre grips and doesn’t puncture every few miles. I like these Contis and recommend them to anyone. I’m not sure whether I’ll leave them on the training bike through the summer, but they’ll be back on next autumn.