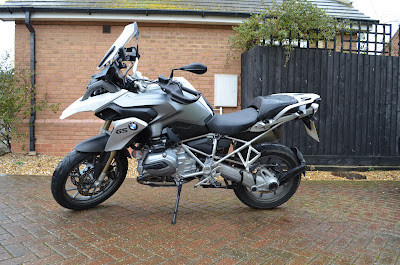 I sold my BMW R1200GS in 2007 in favour one of the company’s four cylinder models. It wasn’t that I disliked it, though I eventually viewed it like I would a fully competent, effective workmate who you gradually realize is a bit of a twat. It was a good bike, it just wasn’t for me. That said, I was looking forward to spending a day on the new, water-cooled GS whilst my K1300R was being serviced at Wollaston BMW in Northampton. If you want detailed analysis of what BMW have changed and why, and the technical differences, read something else. What follows is just what I thought of the latest incarnation of one the country’s most popular motorcycles.

The old bike was a quirky looking machine and the new one retains many of the old bike’s looks, the bug-eyed lights have been brought bang up to date with LED headlamps, the screen is more sharply sculpted and the mirrors no longer boring and round. Silver fairings hide the twin, side mounted radiators which you wouldn’t notice if you weren’t looking for them. The new model is just an evolution of the old one, the differences are hard to spot really.

I exchanged my bike for the keys to a month old GS with about 600 miles on the clock which was equipped with every gadget you could imagine, including Electronic Suspension Adjustment, variable fuel maps and even Cruise Control. The bike also has multiple seat heights, which is just as well, as I have particularly stumpy legs. I don’t know which height it was set on, but being on tiptoes after years of flat footed riding, was disconcerting so I vowed not to stop unless I had to, something made easier by the bike’s light weight and even balance.

With high, wide bars and a new sculpted seat it was easy to get comfortable, even considering the contrast position to my own bike. Whilst I didn’t experience any discomfort, I felt there was only really one place to sit, making the prospect of a long day in the saddle slightly daunting. The adjustable screen offers such excellent protection I found myself on the A45 doing 100mph instead of the 80 or so I had estimated. Maybe that was because I’m used to the wind hitting me hard, but it was certainly aided by the fact the engine is much less stressed, smoother and quieter than its predecessor, in fact it is so laid back and polite, if you let the revs drop down to 2500 you begin to wonder whether it’s stalled and you’re about to fall over, rather than accelerate smoothly through the junction. Never fear, the motor has retained its character, it’s just been refined, just like the gear box, which no longer feels like you’re trying to kick a box of spanners; that is if you can find the gear lever, which felt too far forward for me. The free revving nature of the boxer engine means you can now effectively blip the throttle to aid downshifts, though the torque reaction the motor is known for, disconcertingly caused the whole bike to lurch to one side on the move; not something I recall ever happening on the old bike. The ride by wire throttle is brilliant, smooth, stepless and utterly instinctive.

The bike handles like I remember, though more so. Just when you’re thinking about tipping the bike into the bend, you’re standing it back up and powering away. For someone used to riding a big heavy bike it is a revelation. The light weight doubtless helps the handling, but also made the bike vulnerable to the gusting gale force winds, and I wonder whether the height of your head from the ground fools you into believing that you’re leant over further than you actually are. Whatever, if feels good. Equipped with a number of variable fuel and suspension settings, the bike was set to ‘Rain’ when I collected it, with softer power delivery and super bouncy ‘Soft’ suspension. I changed the spring to ‘Normal’ which very obviously increased both comfort and handling, and changed the power mode to Normal, which made no discernible difference at all.

Life got in the way of my day with the GS, so I rode home and set about my chores before returning later in the day to collect my bike. The return journey was in pouring rain, which revealed more about the bike than the earlier 50 mile jaunt. Firstly, the screen and mass of the GS really does a good job of protecting the rider. In the upright position I was able to see over the screen without ever having to clear water from my visor and arrived relatively dry. Confident and easy to ride, handling is not diminished in the wet. One thing I didn’t like were the clocks. Revs and speed are displayed in traditional analogue style, other information is on a split digital screen will tell you tyre pressures, average and instant fuel consumption, average speed and even the date, but I’m buggered if I could find the time. Worse was the rain splashing up from beneath, obscuring the readout, making it difficult to see at all. I suppose the time was under there somewhere.

The GS was always a good bike, maybe even a great bike. Now it’s been refined. It does everything well (except tell the time) feels well built, is fast and comfortable and well equipped. You can get a sat nav operable from the left grip, I’m certain it comes with a variety of different luggage options and will make many people very happy. It’s a good bike. I just don’t want one.

Getting back on my K1300R was wonderful: it felt small, even sporty, the engine is smooth and powerful. It’s ugly, my visor needed constant wiping, but it goes like a bloody rocket and I love it. 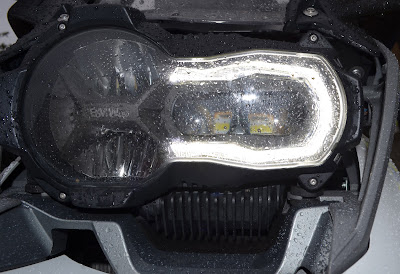