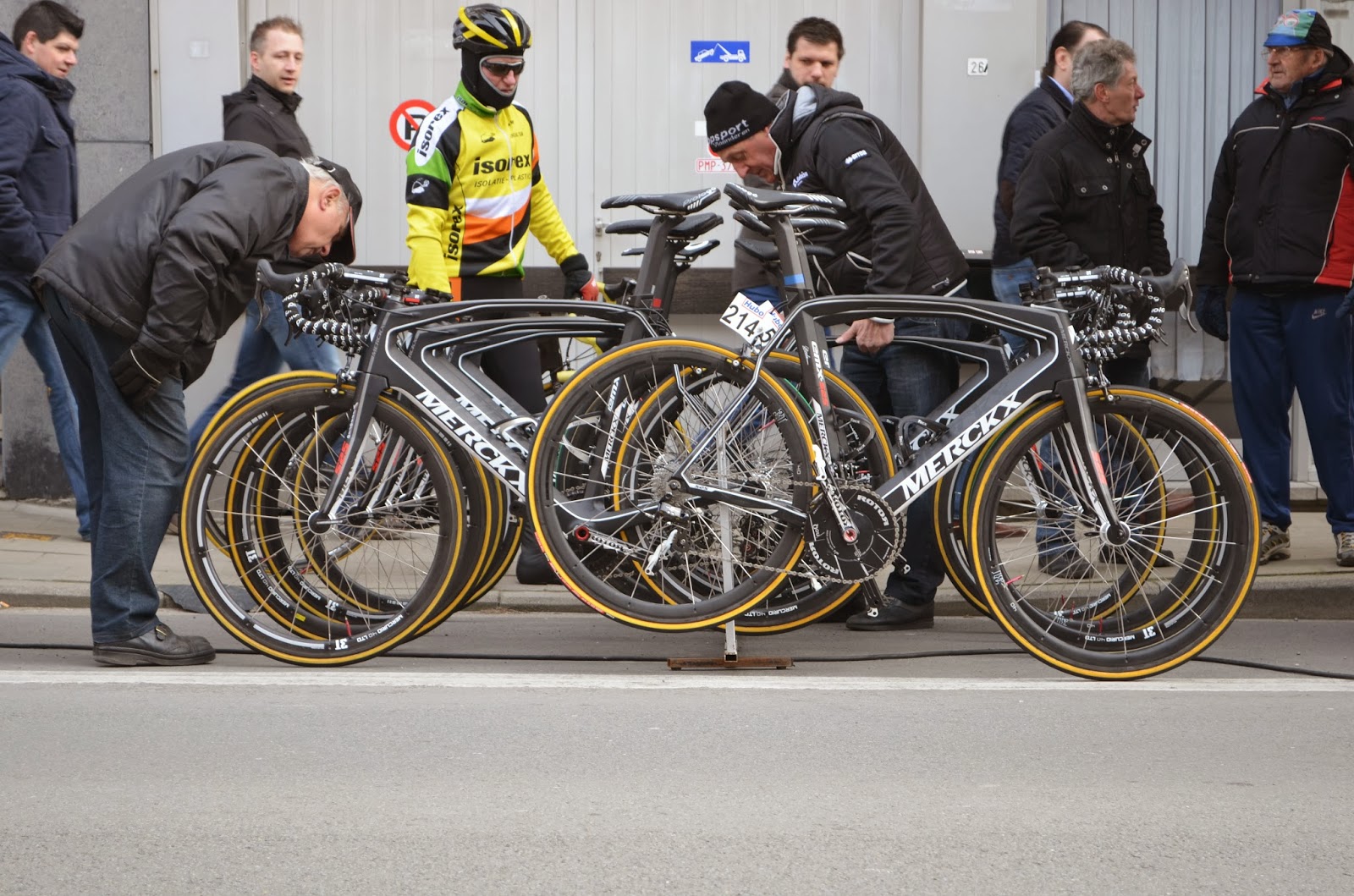 Bart Ottevaere is in real estate, though colleagues in the office might not know it. You see Bart is also President of the Wielerclub Hand in Hand, a small company which organises bicycle races, most of which you’ve never heard of, and one you should have: E3 Harelbeke. Between October and March each year Mr Ottevaere, with two full-time staff, spends most of his time organising the race, which enjoyed its second year as a World Tour event in 2013. Having been created to organise cyclo-cross races, Hand in Hand soon moved to the road and have organised the E3 since it started in the 1950s, when it was born as Harelbeke-Antwerp-Harelbeke. The race route eventually settled into its current form, snaking around the area’s roads and over some iconic Flandrian climbs, ultimately taking its name from a new motorway built nearby.

Harelbeke is a small town, a suburb really, just east of Kortrijk in West Flanders. It’s not unpleasant, though you wouldn’t pick it for a visit unless there was something else to see, which today, fortunately there is. It’s 10 o’clock and even the stewards, wearing corporate blue jackets and manning road barriers, are sipping from cans of Jupiler. Beyond them the Topsport-Vlaanderen truck is first to arrive, careful mechanics line up bikes which attract attention from interested youths and curious middle-aged women alike, all wrapped up against a freezing wind. With each team bus that arrives more people gather, eventually filling the street, some stare at glittering bikes, others chat but keep a watchful eye hoping to grab a word with a rider weaving his way to the start.

A cloying smell of frying drifts through the crowd watching riders sign on, each mounts a large temporary stage, the sort more at home at a rock concert. Most go unmolested, but Tom Boonen is subjected to five minutes of interviews, TV cameras in his face, before receiving a Belgian Champions shirt emblazoned with a huge 5: the number of times the big man had won this race. There’s an expectation he’ll claim win number six, but now we all know it wasn’t to be, indeed the following week saw Tomeke crashing more than racing.

The peloton stand astride their bikes waiting for the start, like young sportsmen anywhere they chat and laugh amongst themselves or with friends, family or supporters. In front of them a commissaire’s car idles, photographers and cameramen on motorbikes prepare to capture the day’s events. Some children are allowed through the throng to line the barriers, while others watch the whole precession roll out of sight from atop parents’ shoulders.

The moment they’re gone, like magic, the streets clear, leaving stewards directing team buses to post race parking spaces, where shutters are drawn like the darkened shops lining the pavements. Then there is silence and a deserted normality descends on the town, like Sundays used to be. The occasional cyclist rolls past and a young woman pushes a pram. Only the bars and cafés are truly alive, packed with people of all ages, some drinking coffee, most drinking beer, conversations ebb and flow, friends are greeted and business booms. This is a big day for Harelbeke, the whole town out for its day in the hazy, freezing Spring sun.

The Belgian Classics start in late February with Omloop Het Nieuwsblad and continue through to early April and de Ronde van Vlaanderen. The final couple of weeks are a frenzy of top level racing all through the west of Belgium, kicking off with Dwars door Vlaanderen there’s barely three days between races until Scheldeprijs, a few days after de Ronde, on the Wednesday before Paris-Roubaix in French Flanders. You could do worse than base yourself in the area for the whole period. When not watching the professionals you could ride your own bike on the same roads, checking out the best vantage points. Some of the towns are a little industrial or characterless, though Ypres, at the Western extreme of the Belgian races, is beautiful and full of places to eat and drink. Visiting Belgium and not drinking local beer is absolute sacrilege. And the cake...

As the hour long drive across the flatlands from Calais to Ypres draws to a close, you can see the hills over which some of the races are ridden, the Baneberg, Monteberg and Kemmelberg are here, though the more famous climbs are further away, to the south and east of Kortijk, only 30 minutes the other side of Ypres. Crossing the Channel is simple, with the ferries taking around 90 minutes and the EuroTunnel 35. If you live in the far south-east of England you could even commute, though it wouldn’t be as much fun. 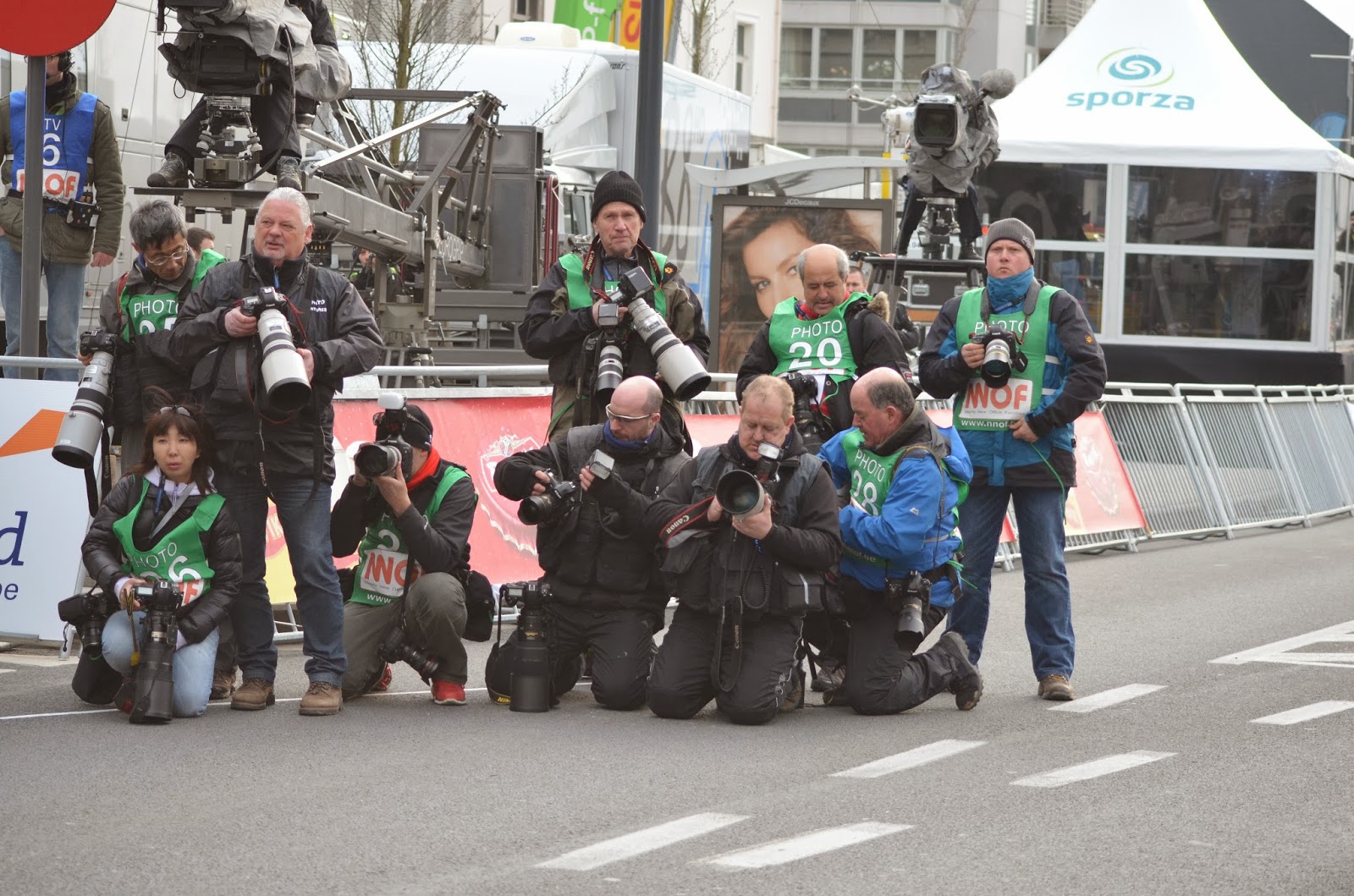 As the race progresses people gradually return, the hospitality tent is full of drinkers, but most stand watching two big screens, nursing beer and breathing in cold air still full of cooking smells. The moment a group containing Boonen, Cancellara and Hayman goes clear, two bookmakers turn to their boards, shortening odds. With about 30kms to go people begin lining the barriers and filling a small temporary grandstand. Their race done, a couple of FDJ riders drift past, behind them a line of coaches return VIPs from a day among the cobbles and bergs, just behind a strip of tape beyond the finish line eight or nine photographers take up their positions.

Bart Ottevaere steps out of a car and waits for the winner stands at the finish waiting for the winner. 2013 was his seventeenth and last time organising E3 Harelbeke: he’s fought off interference from other, bigger race organisers and elevated it to World Tour status. With his two full time employees he’s put all this in place - the barriers, the gantries, the screens; they’ve ensured the 1500 people employed on the day are in place; they arranged Police and other emergency services, and now, as Cancellara crosses the line, 6 months work is over and he can return to real estate.