Riding to the Tour - Part 3

The light shining through the golden pattern on the curtains promised much, but instead we were greeted with cool temperatures and a flat featureless sky. The weather matched our mood, a mix of beer and wine had served to ensure we were not feeling our best when we left Cahors.

Cahors is a nice town. Built on a hill, it has that Mediterranean air and, despite the screaming two-stroke scooters blasting up and down the street, it also felt a little sleepy. That feeling was accentuated by the fact most of the bars and restaurants were closed as it was Monday.

Whatever, Ian managed to find a foie gras and duck pizza. I had lamb chops and we shared bottle of local red wine. Cahors is the home of Malbec, and ours showed nothing of the tough, tannic character of yore, so avoid the Argentinian tat and keep it local (ish.)

Jaded as we were, the first part of our ride down to Lourdes was spent on the motorway. We turned off at Montauban, which owns one of the most disgusting and endless retail areas: mile after mile of car parks and plastic buildings selling stuff no one needds. The city itself looks lovely and the sun finally broke through, so it can't be all that bad.

Our great ride across country to Auch then Tarbes was sullied by increasing anxiety, as my bike began to cut out when slowing down.  Riding round a roundabout pressing the starter button is not a great feeling. It turned out I'd fed the thing too much 95RON petrol and good dose of Super sorted it.

The top of the Tourmalet was in cloud and it was cold, though there was no shortage to of people. All the way up from Campan camper vans lined the roads, hundreds of them, flags out, people sitting on deck chairs: an impromptu community all created for a bike race still two days away. 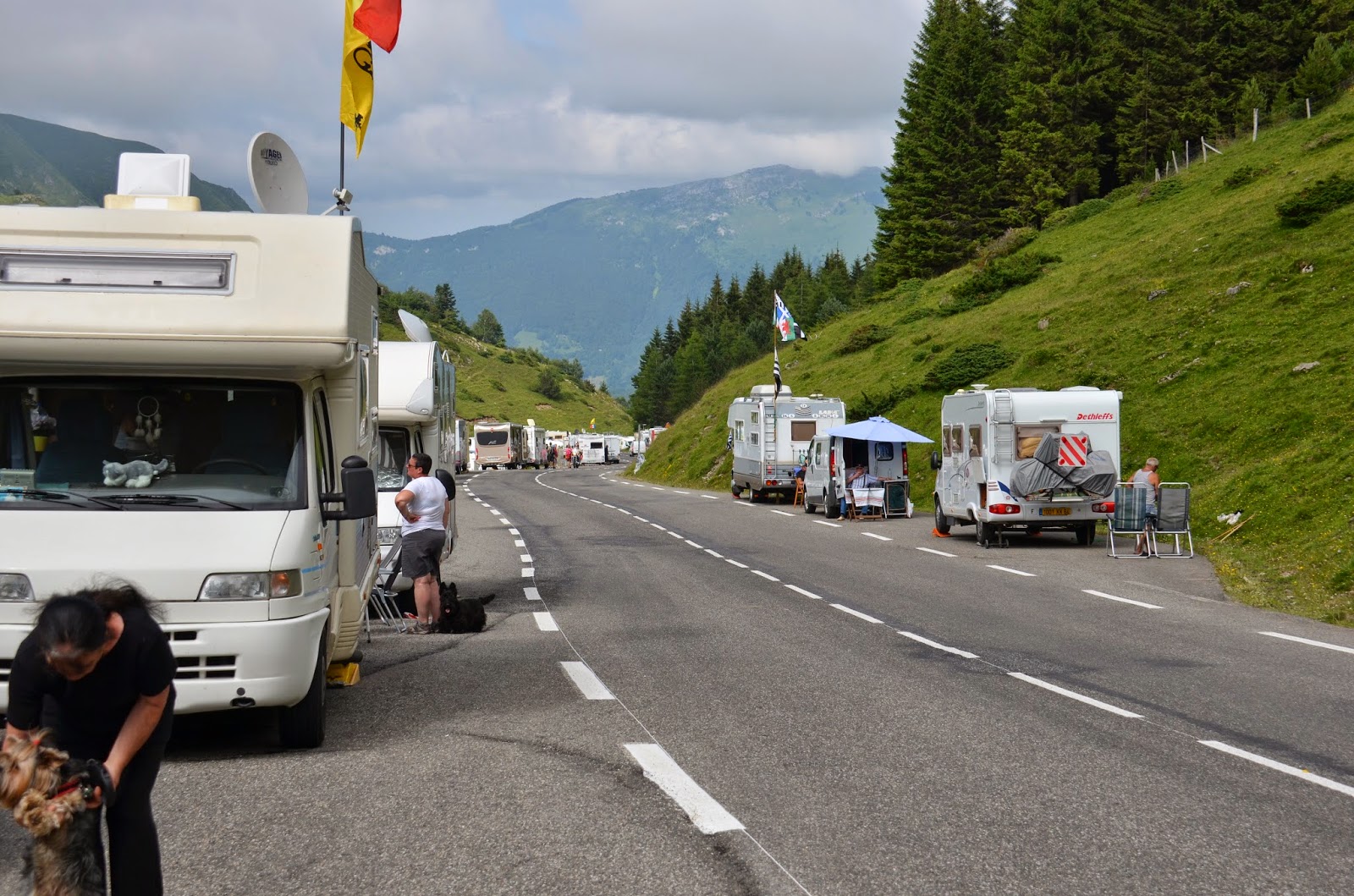 The descent to the base of the Hautacam has been resurfaced and is a delight to ride a motorbike on. It's fast for a mountain road and plunges down the mountain predictably, bend after bend to hone those skills and scare the goats. It could be the best road I've ever ridden.

Lourdes is full to bursting,people everywhere, out hotel is full. The tour is in town.

Today the weather and roads came together to create an great day on the bike. Tomorrow we hope to find somewhere to watch the Tour stage, near the bottom of Pla d'Adet.

Buy Hexen Crystal | ,
HEXEN crystals of the most flawless structure are accessible on our online store available to be purchased also offer our items to singular specialists, stores, and doctors everywhere on the world. A portion of the notable reasons why you should buy from us recorded as beneath:

1. We are the first merchants of HEXEN crystals as we build up the entirety of our items in our lab observing the standard strategies of value and creation. Hexen accessible on our store is of high caliber when contrasted with our rivals.

3. We give dispatching administrations to our customers everywhere on the world. We likewise keep the information of our customers free from any danger.Contact us:
What Sapp: +49 163 4688370
E-mail : info@3mmc-online.com
Website : https://www.3mmc-online.com/ | ,

Motorcycle Recovery London ,
Motorbike Recovery London An enormous segment of the events the condition wins that you may need to move your bike beginning with one spot then onto the following spot, and subsequently your journey for the organizations that help in delivery it most carefully and safely. Bike Recovery London is the one-stop answer for all of your troubles that makes you move your vehicle most safely.
CONTECT US: Unit 32/33 the Business Centre Tariff London, United Kingdom, N17 0YX
Phone : +44800 6226 839 / +4420 7515 9347 / +4420 8216 9909
Whatsapp : +447979855252
Email : info@oneplace2save.com
Website : https://motorcycle-recovery-london.co.uk/ ,

This Los Angeles All singer Mariachi group is made of brilliant musicians and best singers and they are apace becoming the most sought-after group in Los Angeles and Southern California.
Mariachi Los Angeles in California is a group with many years of experience. think one of the Top 12 Mariachis in Los Angeles. loyal, mature, and eager to perform, we ensure that every event is memorable. From playing with big artist names to smaller more individual settings, we secure that each performance will be a memory to cherish.
Mariachi Band Los Angeles

Latin bandas en Los Angeles are popular for their acts and create memorable time for their customers. The professionals at Divine- best wedding live band In Los Angeles- ensure that the event is successful. Divine is one of the best Grupos Versátiles En California and have several years of experience to cater customers. We are one very renowned Bands For Weddings In California. Contact us for Grupo Versatil California to make your event special.
Latin Music Bands For Weddings
Mariachi Band Los Angeles


family lawyers in mobile al
Divorce and other family law matters are often sentimental, times that are hitch to get through. That does not mean that your divorce or child custody issue has to be resolved in a sharp, hostile court battle, though. Having caring and proficient family law attorneys on your side can help to settle the issues amicably and in the best interests of all puzzled. In the event litigation is necessary, your lawyer protects your rights and promotes your best interests.
family lawyers in mobile al |

ovation Latin band is a great musical group formed by 25 professionals, together with musicians and vocalists, who work to make each wedding an unforgettable event. In them, the fervor for music is part of their professional card.
ovation Latin band are customizable and can be adapted to the tastes and preferences of the bride and it also offers a special package for the bride and groom with the following services, among others.