Riding to the Tour - Part 6

If the first day was about rain, then today was more so. I've ridden in worse rain, but never worse conditions, and that includes a ride from Norwich to Cambridge through snow flurries.

We knew it was coming but hatched a plan to take in reverse the route we'd ridden between Montauban and Lourdes. No, not pushing the bikes backwards.

Grey clouds were floating around Lourdes when we left and, for a while it was as if they were chasing us. They weren't, we didn't realise, but we were chasing them.
I thought for a while we'd get away with it. We rode from Tarbes towards Auch, dodging the rain, though the roads were damp in places. Finally, however, the rain came as we reached the suburbs of Auch.

This caused a change of plan which saw us head on major roads to Toulouse to get on the autoroute, as opposed to taking the minor one we had planned. Other than a lack of petrol stations it was OK to start, but at Toulouse the end of the world arrived.

Incredible rain and high winds are bad enough, but the flashing lightening was a massive distraction. Spray reduced visibility to about 100 metres and it was dark. Somehow spray reached the inside of my visor, so I was unable to clear it at all. Then, just before the motorway services appeared through the gloom, through all this chaos came the sweet smell of freshly sawn wood, like some sort if Devine approval.
We needed to stop to regain a sense of perspective.

Coffee and food saw us on our way, but only five miles later, under blue skies, on fast drying roads, at the péage. The bike cut out.

Calls to the breakdown company, to the BMW dealer and much swearing the problem was cured and we resumed the race north to Limoges. Behind us and to the left, the sky looked as if a child had brushed huge strokes of dark grey-black and we raced it all the way to Brive where it caught us.

After all that, to add insult to injury, there is beer but no bar in the hotel. 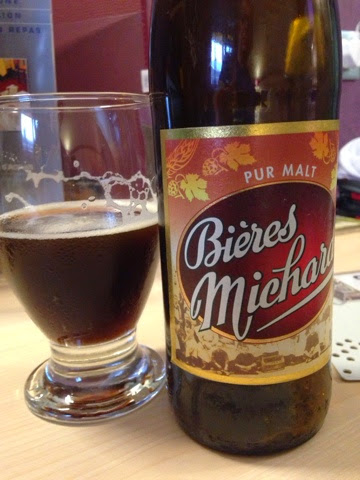